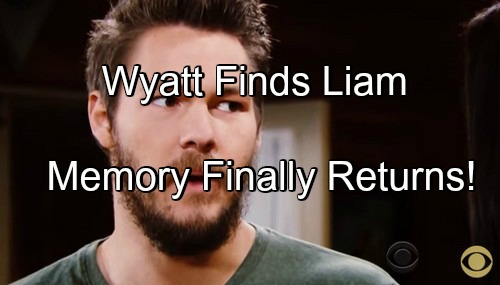 “The Bold and the Beautiful” spoilers reveal that a twisted storyline is about to take another shocking turn over Friday’s episode and continuing next week. B&B viewers know that Liam (Scott Clifton) has been having some fuzzy memories, but he just can’t seem to make sense of what they mean. Liam will continue to struggle over the next few episodes, but a chance encounter will completely change the game.

We’ve all been wondering whether Liam would regain his memory before Wyatt (Darin Brooks) and Steffy’s (Jacqueline MacInnes Wood) wedding. Unfortunately, Liam won’t have an opportunity to rush over and object.

The latest “Bold and the Beautiful” spoilers indicate that Steffy and Wyatt will indeed tie the knot while Liam remains oblivious.

Nevertheless, Liam’s memory is coming back soon. B&B spoilers tease that Wyatt will decide to pay Quinn (Rena Sofer) a visit. He’ll think it would be a nice surprise for his mom. Instead, Wyatt will be the one who’s in for a surprise.

Quinn won’t be around, but there’ll be someone else waiting to keep Wyatt company. “The Bold and the Beautiful” spoilers tease that Wyatt will be stunned to discover Liam at Quinn’s cabin.

Naturally, Wyatt will have questions about what happened to Liam and why he’s been staying with Quinn. As they talk, Liam will begin to remember everything. He’ll realize that Quinn has been deceiving him as part of an elaborate plot.

Of course, Wyatt will eventually have to break the news that he stole Liam’s fiancée and married her. That’s sure to be a touchy subject, especially since B&B took them down a similar road with Hope (Kim Matula). Still, it looks like the bulk of Liam’s anger will be aimed at Quinn.

Wyatt will agree that his mother’s actions were simply inexcusable. This time Quinn went too far. These brothers will put aside their rivalry while they form the ultimate revenge scheme. You can bet that Quinn is going to pay a steep price for messing with Liam and Wyatt’s lives.

Stick with the CBS soap for updates on their attempt to bring Quinn down.

So B&B fans, what do you think about Liam’s returning memory? What will Liam and Wyatt do once they know the truth? Will they make Quinn regret her devious plan?