‘The Bold and the Beautiful’ Spoilers: Brooke Admits Cheating Affair to Ridge – Bill Fires Back When Ridge Explodes in Rage 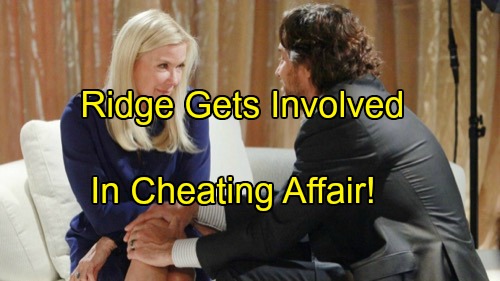 The Bold and the Beautiful (B&B) spoilers tease that Ridge (Thorsten Kaye) will notice Brooke (Katherine Kelly Lang) seems like she’s down in the dumps on this week’s episodes. He’ll press her to open up about what’s going on. Brooke is dealing with something deeply personal, but she’ll decide to trust her ex with the truth.

Ridge and Brooke often serve as confidants to each other. Plus, Brooke has nowhere else to turn. The Bold and the Beautiful spoilers say Brooke will admit that she’s in love with Bill (Don Diamont) and he feels the same way.

Brooke will give Ridge updates on the affair, which may be winding down.

Once Brooke reveals her secret to Ridge, she’ll announce that she’s breaking things off for Katie’s (Heather Tom) sake. However, Brooke will still ache inside for Bill. She’s been pining for him and it’s hard to give up this dream. 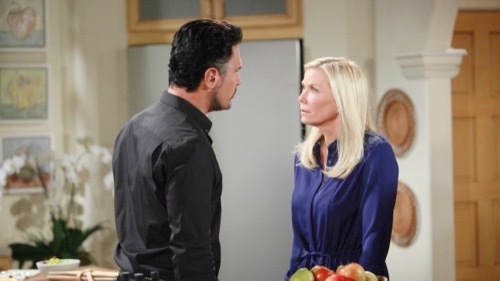 Brooke will likely fear that Bill won’t stop his pursuit. After all, Bill told Brooke that he’d leave Katie if his former flame wouldn’t be his mistress. Brooke might be worried that Bill could really ditch his wife. Ridge will also discuss his own romantic problems, but his primary focus will be helping Brooke through her latest crisis.

The Bold and the Beautiful spoilers state that Ridge will approach Bill for a showdown. These two tend to butt heads over every little thing, but this beef will be a bit different. Someone they both care about is under intense stress and Ridge won’t approve.

He’ll blast Bill for pushing Brooke when she wanted to resist temptation.

Ridge won’t appreciate how Katie is being treated either. He’ll think Bill is disrespecting both women. Ridge will suggest that Bill is selfish and always pulls stunts like this. He doesn’t care who gets hurt as long as he’s happy.

Bill will fire back that this is none of Ridge’s business. He’ll feel like it’s bad enough that he’s married to Caroline (Linsey Godfrey). Bill has never been a fan of their union. You can bet that there’ll be some choice words about what Ridge is doing to Thomas (Pierson Fode), too.

Bill will believe Ridge is a hypocrite for trying to lecture him about his ego.

If the news of this fight gets back to Brooke, she’ll probably be even more upset. Still, part of Brooke might think it’s nice to see Ridge defending her. B&B appears to be moving toward a Thomas and Caroline pairing right now. That could leave Ridge available at some point in the coming months.

Of course, it’s not like it matters if someone is single on a soap. As we’ve seen with Bill and Brooke, people just take the lovers the want. Forget the sanctity of marriage! Nevertheless, it can help a true reunion bloom if they enter it with clear conscience. Obviously, Bill and Brooke haven’t taken that route.

Do Brooke and Ridge have a better chance of reuniting? Will Brooke just end up back with Bill once his marriage blows up? Time will tell, but we have several interesting options when it comes to upcoming couples on B&B.