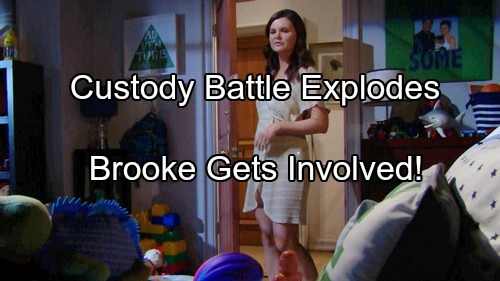 The Bold and the Beautiful (B&B) spoilers tease that Bill (Don Diamont) will play hardball with Katie (Heather Tom) on next week’s episodes. After discovering Bill’s affair with Brooke (Katherine Kelly Lang), Katie unleashed her wrath. Her outburst didn’t go over very well. Bill decided that Will (Zane Achor) wasn’t safe around Katie.

Now that they’ve taken some time to cool off, Katie might hope that Bill has reconsidered. She’s done with her cheating husband, but she desperately wants her son back. Unfortunately, it looks like Bill won’t budge on the issue.

The Bold and the Beautiful spoilers indicate that we’ll see another heated confrontation as Katie pushes Bill to do the right thing. Bill will contend that he’s already doing that. He doesn’t think Katie will be able to properly care for Will. Bill believes Will’s well-being should be their main concern.

Katie will maintain that Will needs his mother. Bill claims that he wants stability for Will, but his actions probably weren’t the best solution. Will has been taken from his home and his mom. Young children thrive on a routine, but Will has had his normal life ripped away.

After Katie makes her case, Bill will insist that he just can’t back down. B&B spoilers state that this custody battle will become incredibly volatile. Things could get out of control. Brooke will find these two engaged in a fierce war and she’ll quickly intervene.

Of course, Brooke is pretty much the last person Katie wants involved in all of this. When Katie told Brooke goodbye, she planned on cutting her sister out of her life entirely. Plus, Katie holds Brooke partially responsible for what Bill is doing. None of this would’ve happened if Brooke had kept her feelings to herself.

In other words, Katie will likely want Brooke to mind her own business. Brooke will still hope to help if she can. The Bold and the Beautiful spoilers reveal that Brooke will attempt to help them negotiate. She’ll suggest that Bill and Katie can work out an agreement that will leave both sides satisfied.

That’s easier said than done. Both Bill and Katie are going to be stubborn about custody. They don’t trust each other and that presents a real problem. Will Brooke convince them to come up with a new plan? It’s tough to say. When emotions are running high, it’s difficult to solve any type of crisis.

Bill mentioned that he would be willing to use his influence over any judge in town if need be. That may put Katie at a severe disadvantage. Nevertheless, we shouldn’t underestimate the power of a mother’s love. If there’s a way to gain the upper hand, Katie will find it.

Liam (Scott Clifton) is still in Katie’s corner. Perhaps he could pitch in. It just depends on how busy Liam is with his pursuit of Steffy (Jacqueline MacInnes Wood). We’ll give you updates as more news rolls in. Stay tuned to B&B and don’t forget to check CDL often for the latest Bold and the Beautiful spoilers, updates and news.