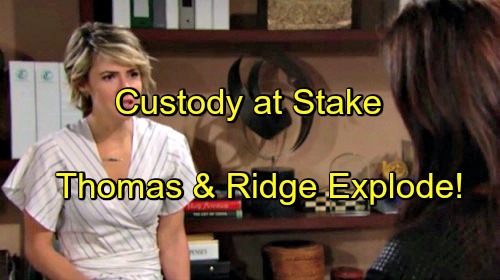 The Bold and the Beautiful (B&B) spoilers tease that Thomas (Pierson Fode) will catch Ridge (Thorsten Kaye) off guard. These two have been trying to work out an agreement regarding Douglas’ upbringing and de facto custody, but they’ve been fighting every step of the way. It’s a constant battle between this father and son.

When Thomas first learned the truth, it was evident that he’d have trouble sticking to the plan. Thomas loves Douglas and there’s no way he’ll settle for being his big brother indefinitely. Ridge has been doing everything he can to keep Thomas away from Douglas, but that’s a big mistake.

By trying to push Thomas out of the picture, Ridge is actually drawing him closer.

The Bold and the Beautiful spoilers say Ridge will be stunned when Thomas drops a bomb on him. We don’t know for sure what this news is all about, but it sounds important. Perhaps Thomas will announce that he’s had enough of sitting on the sidelines. He might suggest that he’s ready to be Douglas’ father right this minute.

Then again, maybe Thomas will simply demand more time with Douglas. He might even want some sort of secret custody arrangement. Thomas is determined to bond with his son and he has no intention of letting Ridge stand in his way.

B&B viewers know Ridge has been hesitant to accept that he’s not in control anymore. When Ridge found out Caroline (Linsey Godfrey) was carrying Thomas child, he blew his top. From that day forward, Ridge never wavered from his “our baby” mantra.

If Katie (Heather Tom) hadn’t intervened, Thomas would probably still be oblivious. Fortunately, Thomas got updates on Douglas’ paternity and now he wants to be as involved as possible. Once Ridge gets blindsided by Thomas’ latest move, he’ll throw one of his usual fits. Thomas enrages his father on a daily basis.

The Bold and the Beautiful spoilers reveal that Caroline will try to put a stop to all of this conflict. She’ll step in as a referee during their upcoming showdown. Both Ridge and Thomas have a soft spot for Caroline. If there’s anyone who can get through to them, it’s her.

Caroline will urge them to compromise and things will likely calm down somewhat. However, Thomas isn’t Ridge’s only problem. Katie, Brooke (Katherine Kelly Lang) and Bill (Don Diamont) are all in on the secret, which means there are still plenty of threats.

Rick (Jacob Young) also has suspicions about what Ridge is hiding. Steffy (Jacqueline MacInnes Wood) will even get curious soon. Ridge is going have a tough time keeping Douglas’ paternity under wraps. Snoopers always lead to major snags. Katie proved that! Stay tuned to the CBS soap to see how and when this secret will be exposed.

So B&B fans, what do you think about Thomas and Ridge’s faceoff? Will Caroline be able to settle their dispute? Will it even matter if more people manage to get in the loop? Voice your opinion in the comments below and don’t forget to check CDL often for the latest Bold and the Beautiful spoilers, updates and news.