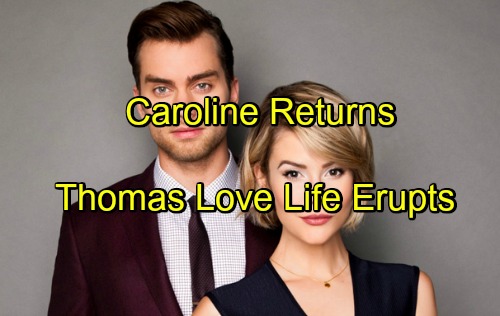 The Bold and the Beautiful (B&B) spoilers tease that Caroline (Linsey Godfrey) will finally return during next week’s episodes on October 5 from her extended trip to New York. She told Thomas (Pierson Fode) she wouldn’t keep Douglas away for too long. Caroline will keep that promise by coming back to Los Angeles. She wants to give Thomas some time with his son.

B&B fans know that Caroline needed to clear her head after her split with Ridge (Thorsten Kaye). Thomas had previously asked Caroline to be with him. He wanted the baby to be raised with his parents together, but it was more than that. Thomas had been pining for Caroline for quite a while.

However, Caroline just wasn’t ready. She had to unpack all of her emotions and figure out her next move. What did Caroline decide during her trip? Has she reached any conclusions about her future? It’s tough to say what Caroline is thinking these days.

While Caroline has been out of the picture, Thomas has been growing closer to Sasha (Felicia Cooper). Unfortunately, they aren’t sharing as many scenes now. Quinn (Rena Sofer) and Eric’s (John McCook) trouble has sort of taken over the show. Thomas helped the Forresters meddle in Eric’s love life and forgot about his own.

The fact that Thomas and Sasha lost momentum could turn this into a lackluster triangle. If Caroline comes back with love on her mind, would Thomas really turn her down for his fling? It feels like Sasha and Thomas haven’t really established much of anything yet.

If Caroline has decided that she’s still not ready to be with Thomas, that would lead us down a different road. In that case, Thomas could move forward with Sasha and we could watch Caroline’s jealousy develop. Nothing can spark a soap romance like envy.

As for Thomas, how will he react once Caroline returns with Douglas? Will Thomas once again adore his family vision or is he already loving the flirty fun Sasha brings to the table? If it’s the latter, it could cause some strife with his “baby mama.”

Caroline won’t want Thomas acting like a swinging bachelor when he’s got a child to raise. Single or not, Thomas needs to keep his son in mind. He has to remember that his choices will affect Douglas as he grows older.

If Thomas gets serious about Sasha or anyone else, she could become Douglas’ stepmother. Caroline will be keeping a close eye on Thomas and his potential love interests. Douglas will undoubtedly be Caroline’s top priority.

Of course, they may have backed off Sasha and Thomas for a different reason. Perhaps The Bold and the Beautiful is going all in on Caroline and Thomas. Sasha could revert to her obsessive tendencies if Thomas ends up with Caroline. Zende (Rome Flynn) should’ve warned Thomas about Sasha’s powers of seduction and her stalker-ish behavior.

RT if you think @renasofer SLAYED this scene #BoldandBeautiful pic.twitter.com/LJF02i7s6v