The Bold and the Beautiful Spoilers: Chaz Bono Stars On B&B As A Minister – Who Is Getting Married?

BY Sean O'Brien on February 11, 2016 | Comments: one comment
Related : Soap Opera, Spoiler, Television, The Bold and the Beautiful 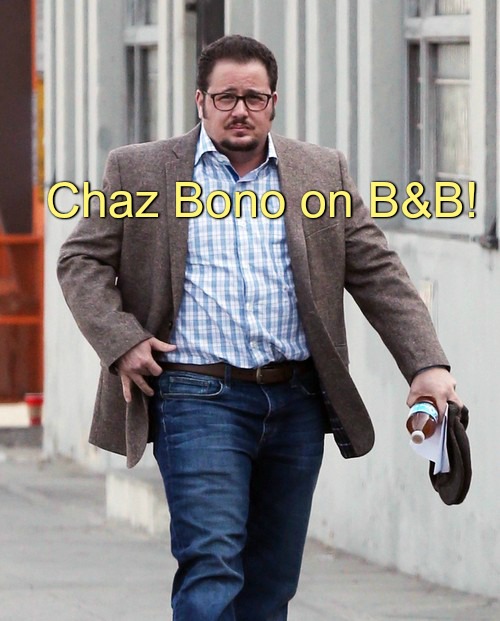 “The Bold And The Beautiful” (B&B) spoilers tease that Chaz Bono has joined the cast of the CBS soap opera and will be guest starring in a few episodes next month. According to an all new report from People Magazine, Chaz (son of Sonny and Cher) will be playing the part of a minister on “B&B” on episodes airing on March 31 and April 1.

Bono gushed to People Magazine about how excited he is about his guest role on the CBS soap opera.

Chaz explained, “I’m very excited to have been cast in a role on “The Bold And The Beautiful.” I’m grateful that they are willing to pay me to do something I love, which is to act.” This is Chaz’s first acting gig since 2013 when he appeared on a guest role in ABC Family’s now cancelled drama “The Secret Life Of The American Teenager.” He also has done guest work on the Nickelodeon show “Degrassi.”

We’re kind of curious what exactly “The Bold And The Beautiful” needs a minister for. The “B&B” characters don’t spend a whole lot of time in church. Could somebody be getting married – like for example Wyatt Fuller and Steffy Forrester?

Or maybe they bring in a minister to try to help Quinn Fuller after her latest trip to “Crazy Town.” What do you think “B&B” fans? Are you as excited as we are to welcome Chaz Bono to “The Bold And The Beautiful?”

What will his character be on the canvas for? Share your thoughts and theories in the comments below, and don’t forget to check CDL daily for all of your “The Bold And The Beautiful” spoilers and news!