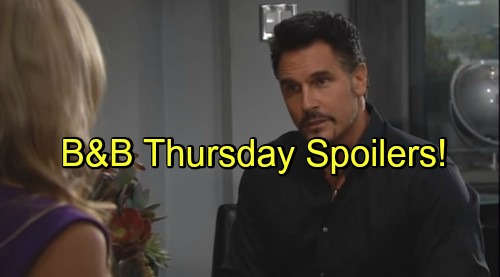 The Bold and the Beautiful (B&B) spoilers for Thursday, October 20, tease that Quinn (Rena Sofer) will refuse to let anyone jeopardize her husband’s health. Eric (John McCook) is on the road to recovery, but he can’t afford to have any setbacks. The last thing he needs is Ridge (Thorsten Kaye) pestering him nonstop.

B&B spoilers reveal that Quinn will voice her complaints to Wyatt (Darin Brooks). She’ll insist that she won’t allow Ridge to act like he’s in charge. It’s clear that Eric doesn’t trust his son anymore. Ridge has made some mistakes and they’re finally catching up with him. 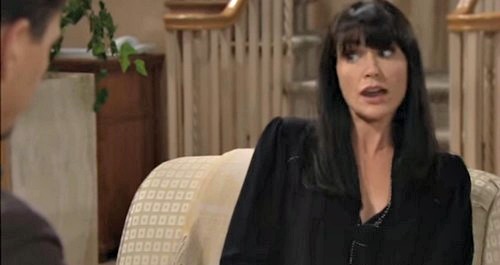 However, Donna will learn that there are some issues plaguing the wedding plans. The Bold and the Beautiful spoilers say Donna and Bill will have a chat about RJ (Anthony Turpel). Bill will admit that RJ’s negative reaction caused Brooke to delay their nuptials.

Bill won’t be too concerned about the angry teen’s outbursts. He’ll be convinced that everything is going to work out. Thursday’s preview video shows Bill saying, “RJ will come around when he realizes he has no choice…that Brooke and I are good together…that I make her happy.”

Donna will decide to get the other side of the story from Brooke. She’ll eventually get updates on the scheme to get Bill’s shares in Forrester Creations. Donna won’t be sure that Brooke should be marrying Bill as part of a business strategy. That sounds like the quickest route to heartbreak.

Of course, this wedding will probably fall through. Brooke will begin to have some doubts after her next conversation with Ridge. The Bold and the Beautiful spoilers say Brooke will be confused by some comments Ridge makes. She’ll wonder what he’s trying to say. 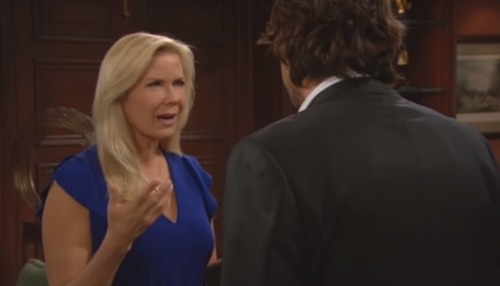 The preview clip shows Brooke stating, “One minute you’re telling me to go marry Spencer and the next you’re saying…I don’t know what. Do you have feelings for me, Ridge?” It’s obvious that Ridge has fallen for Brooke again. Perhaps a little piece of him as been in love with her all along.

Will Ridge confess everything or brush off her suspicions? Regardless, it looks like this plot will continue. Brooke may not be ready to devastate Bill just yet. Unfortunately, the bomb is sure to drop sooner or later. Bill is going to be crushed when he realizes Brooke doesn’t want a future with him after all.

You can bet that a war is brewing. When Brooke and Ridge inevitably end up together, Bill will think he was robbed of his woman. Ridge and Bill already hate each other. This will only add fuel to the fire. We’ll keep you posted as news comes in.

Today on #BoldandBeautiful… Will Liam and Steffy act on their feelings for each other? WATCH FULL EPISODE: https://t.co/6mb0xs39ej pic.twitter.com/5V011GYbNo