‘The Bold and the Beautiful’ Spoilers: Eric Shocks Family by Naming Himself FC’s New CEO – Deacon Grills Quinn About Scam 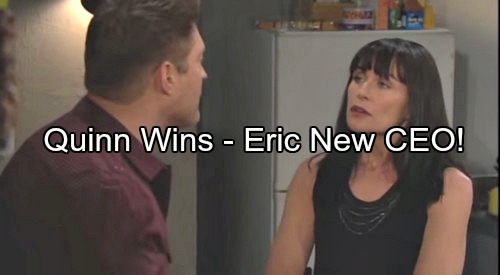 The Bold and the Beautiful (B&B) spoilers for Thursday, July 14, tease that Liam (Scott Clifton) will be stunned when he gets updates on Bill’s (Don Diamont) recent move. After Liam learns Bill took Will (Zane Achor) from Katie (Heather Tom), he’ll struggle to wrap his head around the idea. Liam will lash out at Bill for making a terrible situation even worse.

Liam will mention that Bill is the one who caused Katie’s erratic behavior. Bill had an affair with Brooke (Katherine Kelly Lang) and tried to make Katie think her suspicions were crazy. Liam won’t be able to grasp how Bill could hurt Katie like this. He’s tearing her life apart.

Bill will contend that it doesn’t matter what led Katie down this path. The point is she’s not stable. The Bold and the Beautiful spoilers say Bill will be willing to do whatever it takes to protect his son. It looks like Wyatt (Darin Brooks) will chime in on this eventually. However, he’ll take a different stance than Liam.

Wyatt will disapprove of his brother’s rant about Bill’s course of action. There’s a lot of tension between Wyatt and Liam at the moment. Now that Liam knows Bill is a hypocrite, he doesn’t see any reason to respect Wyatt’s marriage to Steffy (Jacqueline MacInnes Wood).

It makes sense that Wyatt would want to side with Bill on anything and everything. If Wyatt starts admitting that Bill’s tactics are less than ideal, it could fuel Liam’s fight to win Steffy back. Wyatt will likely defend Bill and suggest that he’s simply doing what’s best for his child.

Elsewhere, B&B spoilers indicate that Eric (John McCook) will announce his choice for CEO of Forrester Creations. Rick (Jacob Young) will feel confident that Eric will put him back in power. Meanwhile, Steffy will hope that she’ll be given a fair shot. Eric will gather the family together and shock them by declaring that he’s returning to the throne himself.

That’s right! Quinn (Rena Sofer) talked Eric into resuming his role as CEO. She obviously has something up her sleeve. Deacon (Sean Kanan) will wonder what kind of con Quinn is running. He’ll state that he understands Quinn better than any man on the planet. Deacon will believe Quinn is more excited by the Forrester name than she is about an actual romance with Eric.

The Bold and the Beautiful spoilers reveal that Quinn will continue scheming as usual. Things are moving in the right direction, but Quinn isn’t always patient. She may try to pull a stunt in an effort to achieve her goal ASAP. Quinn wants to be accepted into the Forrester family and she’ll do anything to make that happen.

It’s clear that something is brewing. There’s a reason B&B put these two together. The payoff will undoubtedly be entertaining. We’ll let you know when more news emerges on Quinn’s sneakiness. Stay tuned and don’t forget to check CDL often for the latest Bold and the Beautiful spoilers, updates and news.