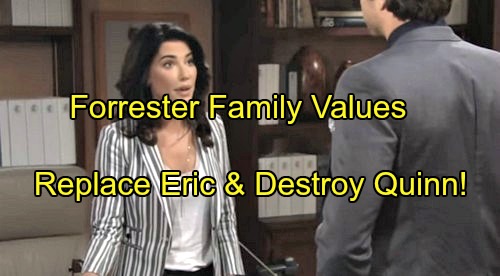 The Bold and the Beautiful (B&B) spoilers for Tuesday, September 20, tease that Quinn (Rena Sofer) will wonder what Eric (John McCook) intends to do about the rest of the Forresters. She knows she’s caused a lot of friction and she’s not sure what that will mean for their future. Quinn will ask if Eric is really going to write off his entire family just to have a lifelong romp in the hay with her.

Eric will suggest that he’s willing to distance himself from his brood if that’s what it takes. He cares about his kids and grandkids, but he won’t let them control his life. Quinn will insist that Eric needs to help the Forresters see another side of her. She’ll want Eric to convince them that she’s not the enemy.

Eric has been trying to make his family see the light, but nothing seems to work. He’s getting tired of all the bickering and he just wants to enjoy being with Quinn. Still, Eric might agree to give it one more shot for his love. Whatever happens, he’ll want Quinn to know that she comes first. 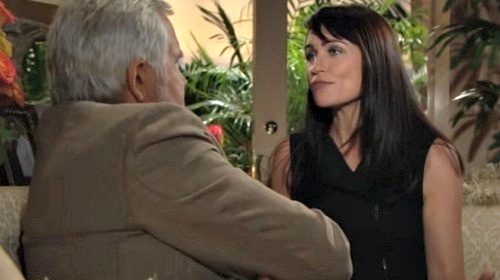 The Bold and the Beautiful spoilers say Eric will assure Quinn that she’s going to be Mrs. Eric Forrester. He’ll add that there’s nothing Ridge (Thorsten Kaye) or anybody else can do to prevent that. Will Eric and Quinn actually tie the knot? Stick with B&B to see how the wedding goes later this week.

In the meantime, Ridge will get some infuriating news. The Bold and the Beautiful spoilers state that Ridge will receive an email about Eric’s upcoming marriage to Quinn. He won’t be pleased to learn that the wedding is coming up so soon. The Forresters’ scheme is fading fast thanks to RJ (Anthony Turpel) and his influence on Brooke (Katherine Kelly Lang).

Brooke decided she needed time to address the situation and help RJ understand. Bill (Don Diamont) will continue to fight Brooke on this, but she won’t back down. Brooke will maintain that she needs to be there for RJ. She can’t just run off. Bill is undoubtedly irked that a pesky teen has spoiled his plans. There’s no way he’s going to give up so easily. 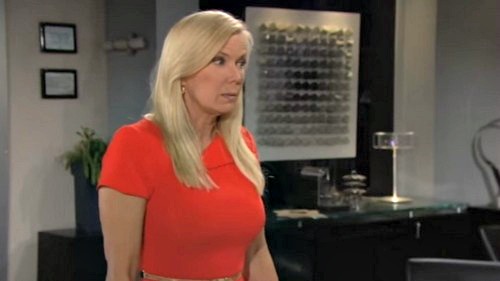 Steffy (Jacqueline MacInnes Wood) will feel like they have to get through to Brooke. She promised to help them and Steffy wants her to keep her word. Steffy will have a tense chat with Thomas (Pierson Fode) in Tuesday’s episode. He might be worried about RJ, but Steffy’s mind will only be on their plot to gain control of the company.

Steffy will declare that Brooke has to marry Bill to get those shares. She’ll contend that it needs to happen as soon as possible. Unfortunately, Steffy may have to give up that dream. Brooke’s feelings for Ridge could put her marriage to Bill on hold indefinitely.

RJ will get updates on Brooke’s wedding postponement and he’ll be happy to hear it. However, he’ll hope to turn Brooke’s “later” into a permanent “no.” We’ll keep you posted on RJ’s next move. Stay tuned to B&B and don’t forget to check CDL often for the latest Bold and the Beautiful spoilers, updates and news