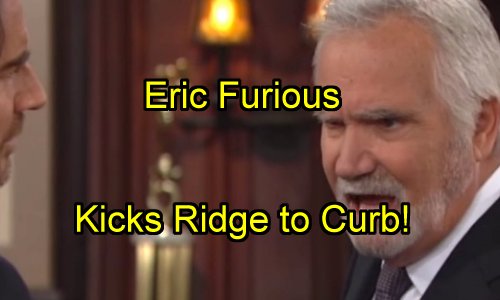 Hot The Bold and The Beautiful (B&B) spoilers tease that when Eric Forrester (John McCook) faces off with Ridge Forrester (Thorsten Kaye) and kicks him out of the family mansion, the Bold drama will kick into high gear. Eric is sick and tired of the way his family is treating him.

Both Steffy Forrester (Jacqueline Wood) and Ridge are treating Eric like he’s a child. They’ve issued ultimatums that he can’t see Quinn Fuller (Rena Sofer) and soon things will get worse. We’ve seen that Ridge is scheming to get Bill Spencer’s (Don Diamont) shares of Forrester Creations.

Ridge wants to use Katie Logan (Heather Tom) and her divorce from Dollar Bill to get him the power to overthrow Eric and take back the CEO chair. Eric will be offended on both a professional and personal level by Ridge and Steffy’s actions. 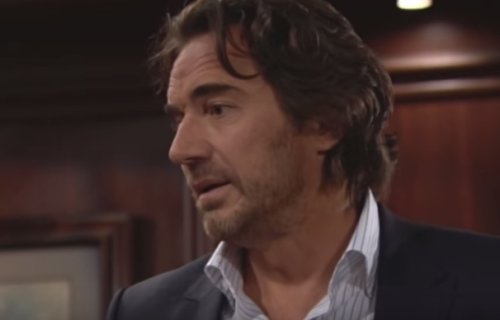 Instead of getting Eric to cut Quinn out of his life, the Forresters will shove Eric into Quinn’s arms by their actions. To Eric, it seems like Quinn is the only one that sees him as a vital man, capable of running his corporation – and the family.

For too long, Eric has been living in the guest house and letting Ridge and Rick Forrester (Jacob Young) rule the family roost and the company. But with Quinn’s encouragement, Eric has taken back the CEO seat and will soon take back the family home.

When Eric gets wind of how Ridge confronted Quinn, Eric will boot Ridge from the family home and will take it back for his own. We’ll see Eric at the helm of all things Forrester and, what’s really shocking, is that Quinn may soon rule as his queen. 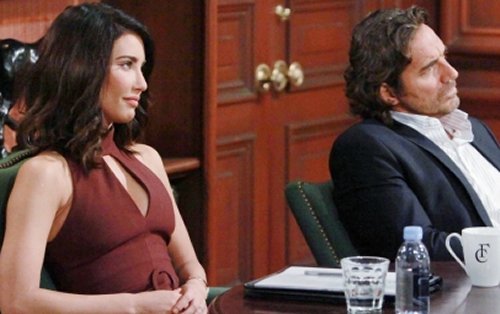 Remember Ridge and Rick’s battle over whose portrait went over the fireplace? Ridge wanted his mom Stephanie’s painting while Rick wanted Maya Avant’s (Karla Mosley) face smiling down on them. But how will they react if they see Quinn’s portrait in the place of honor instead?

What’s ironic about all of this is that Quinn isn’t scheming for power – yet she’ll get a lot of it very soon. Quinn genuinely cares about Eric and has fallen hard for him – and Eric has fallen for Quinn. No matter what anyone says, their love is real.

The Bold and The Beautiful spoilers tease Eric will soon rehire Quinn. The groundwork was laid when Eric told the family at a board meeting that the jewelry division’s profits are down. He needs Quinn back in charge so that arm of the business doesn’t go down the tubes. 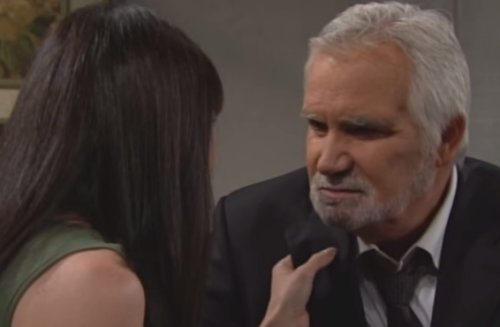 From there, Eric will move Quinn out of her little hotel hovel and into the family mansion – and this will spark an all-out Forrester civil war. It will be interesting to see if Rick and Ridge will ally to try and oust Eric at home and work even though they never agree on anything.

Eric and Quinn will soon be the Forrester Creations and Forrester family power couple but how long can it last? Will all the kids and grandkids align against them? Is there none among the Forresters that will respect Eric’s decisions, both personal and professional?

What do you think B&B fans? Are you excited to see Eric and Quinn revel in their love and challenge those that want to split them apart? Are you on their side or the side of their opponents?

Share your comments below and check back with CDL often for the latest The Bold and The Beautiful spoilers.