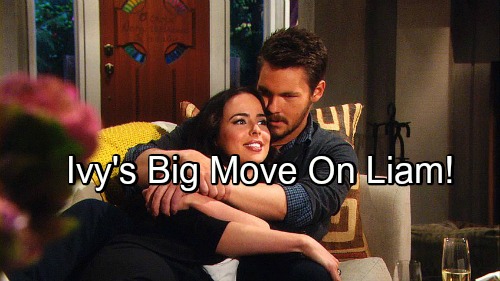 The Bold and the Beautiful (B&B) spoilers tease that Ivy (Ashleigh Brewer) and Liam (Scott Clifton) will finally pop up again. They’ve taken a backseat to Eric (John McCook) and Quinn’s (Rena Sofer) drama, but they’re about to return to the mix. Things could get interesting as Ivy ups her game.

Quinn is too busy worrying about her husband to care what Ivy’s doing at the moment. However, Ivy hasn’t forgotten about her goal. She was reluctant to get involved in this at first, but she quickly warmed up to the idea.

It appears Ivy’s makeover and attitude adjustment are working in her favor. Ivy is gaining confidence and that’s exactly what she needs to pull this off. The Bold and the Beautiful spoilers say Ivy will make another move in hopes of winning Liam over.

Ivy probably won’t make much progress, but that’s OK. It’s a marathon, not a sprint. Liam has been pining for Steffy (Jacqueline MacInnes Wood) for quite a while. He can’t just forget about her overnight. Nevertheless, Ivy has entered the picture at just the right time. Since Steffy is focused on getting rid of Quinn, she’s obviously not in Liam’s orbit.

Liam is undoubtedly getting lonely without someone special by his side. Ivy could use that to her advantage if she keeps it up. Her next attempt to woo Liam may not succeed, but she won’t back down. Ivy will just try to add a little oomph to this plot. She’ll be certain that Liam will come around if she can make him see what he’s missing.

The Bold and the beautiful spoilers reveal that Ivy will decide to think outside the box. She’ll do something extreme to win Liam over. What could that mean? Is Ivy going to parade around in sexy lingerie or something? The old Ivy wouldn’t do that, but the new one might.

Ivy isn’t the same woman she used to be. At least that’s what she’s telling herself! In reality, Ivy is hiding who she really is. She’s trying to mold herself into what Liam wants and that’s not how you build a solid relationship.

If Liam only falls for her because she looks and acts like Steffy, that’s not real love. Ivy deserves to be more than a Steffy substitute, but she doesn’t realize that yet. Let’s hope Ivy figures it out eventually.

This could be a good lesson for Ivy, but she might have to go through an emotional roller coaster before she gets to the moral of the story. Ivy is most likely in for a lot of heartbreak. Liam’s reunion with Steffy seems inevitable.

It’s worth mentioning that the end could be near for Steffy and Wyatt’s (Darin Brooks) marriage. B&B viewers have watched the tension lift between Wyatt and his mom. He’s beginning to see the genuine affection Quinn has for Eric. When Ridge (Thorsten Kaye) and Steffy try to destroy Quinn’s dreams, Wyatt will step up to salvage them.

Will Wyatt lose Steffy in the process? Will that open the door for Liam to get back together with Steffy? We’ll give you updates as other news comes in. Stay tuned to B&B and don’t forget to check CDL often for the latest Bold and the Beautiful spoilers, updates and news.

This week on #BoldAndBeautiful, Steffy becomes determined to find a loophole that will free her family of Quinn! https://t.co/P3bHcDZon6 pic.twitter.com/eNkarfYmP9