‘The Bold and the Beautiful’ Spoilers: John McCook Dishes on Quinn’s True Motives, Eric’s Rage and the Wedding Boycott

BY Heather Hughes on September 16, 2016 | Comments: one comment
Related : Soap Opera, Spoiler, Television, The Bold and the Beautiful 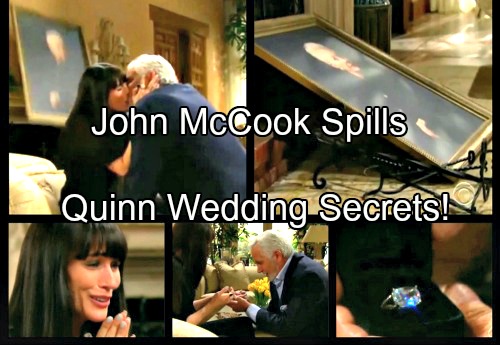 The Bold and the Beautiful (B&B) spoilers tease that Eric (John McCook) and Quinn (Rena Sofer) will try to ride the waves the Forresters are making. They’re determined to ignore the naysayers and tie the knot. Their wedding day will arrive on September 23 and it’s sure to bring some major drama.

In an interview with TV Insider, John McCook opened up about Quinn and Eric’s unusual relationship. The Bold and the Beautiful fans are all wondering if this romance is the real deal. Is Quinn head over heels or is this just a power play? McCook believes Quinn is truly in love with the charming Forrester patriarch.

“Rena and I are intent on playing this as the real thing – that Quinn has changed for the better and that this is true love – and we’ve had no hints to the contrary from our writers,” McCook said. Quinn has a softer side these days and she’s definitely comfortable in Eric’s arms. However, Quinn is still a schemer. Her secret mission with Ivy (Ashleigh Brewer) proves that.

Is there a possibility that Quinn is deceiving Eric? McCook noted that he hopes not. He suggested that Eric has been as dumb as a rock for the last 25 years! McCook is counting on Eric being older and wiser in this relationship.

Still, you can never really know for sure with crazy Quinn. The wheels are always turning and it’s impossible to understand what’s going on in that twisted brain of hers. McCook praised Sofer’s portrayal in this storyline and added that “Quinn’s a pretty good actress, too.”

Ultimately, McCook conceded that things could shift. “Maybe she is pulling the wool over Eric’s eyes…but at least it’s cashmere and that’s really nice,” McCook said. Of course, there’s another way of looking at all of this. Perhaps Quinn has simply ditched the dangerous stunts in favor of more trivial offenses.

Is it right for Quinn to continually meddle in Wyatt’s (Darin Brooks) love life? No, but she’s not throwing someone off a bridge or holding anyone hostage. That’s progress! Quinn is simply educating her apprentice on the art of wooing a former flame.

In Quinn’s mind, she might think she’s doing a good deed. It’s certainly less outrageous than shoving Deacon (Sean Kanan) over the edge of a cliff. Minor plots are the best we can hope for. If Quinn takes her plan too far as usual, we’ll have to reassess the situation. For the time being, Quinn is doing a decent job of keeping her dark desires under control.

Nevertheless, the Forresters won’t stand there and watch Eric marry this creature. B&B spoilers reveal that Ridge (Thorsten Kaye) will lead the charge in keeping the family away from the ceremony. The only guests will be Ivy and plenty of empty chairs.

It’s sweet that Ivy will be in attendance. She doesn’t have much of a choice since she’s Quinn’s lackey now, but it’s nice anyway. The Bold and the Beautiful spoilers say Eric will be furious that his kids and grandkids couldn’t embrace the idea of forgiveness. His fury may shock the Forrester clan.

Will Eric make his family pay the price for their lack of support? We’ll give you updates as more news emerges. Stay tuned to B&B and don’t forget to check CDL often for the latest Bold and the Beautiful spoilers, updates and news.