‘The Bold and the Beautiful’ Spoilers: Katie and Ridge Conspire To Steal Bill’s Forrester Shares in Divorce Takedown 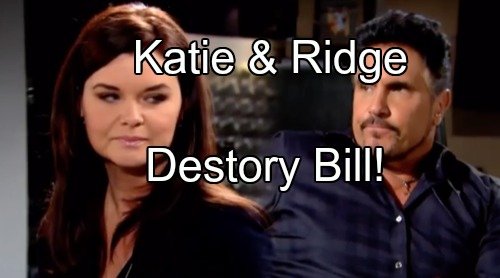 The Bold and the Beautiful (B&B) spoilers for the week of August 8-12 tease that Bill (Don Diamont) will insist his marriage is over. He’ll want Katie (Heather Tom) to sign the divorce papers and be done with it. Of course, it’s not going to be that easy. Bill has built quite an empire and Katie believes she’s entitled to a piece of the pie.

Here’s where things will get interesting. We’ll see multiple storylines collide as Ridge (Thorsten Kaye) gets involved in Katie’s divorce battle. The Bold and the Beautiful spoilers say Ridge will want Katie to get her hands on Bill’s shares in Forrester Creations. He’ll ask Katie to list them as a demand in her settlement.

Ridge is undoubtedly concerned about the threat Quinn (Rena Sofer) poses. Eric (John McCook) will inevitably change his mind about his leading lady. Why should he have to put his happiness on hold?

That’s especially true if Steffy (Jacqueline MacInnes Wood) decides to dump Wyatt (Darin Brooks). Steffy’s marriage might be kaput anyway, so Eric might as well live it up with his bad girl. The Forresters will think Eric is nuts for choosing Quinn. They’ll want to keep them apart if possible.

Nevertheless, Eric is a grown man and he’s spent a lot of time without someone special in his life. When Eric is with Quinn, he can finally combat that loneliness that everyone keeps talking about. Eric had better be careful has he heads down this dangerous path.

Despite claims that’s she’s changed, B&B fans know Quinn is crazy and manipulative. Meanwhile, Ridge could soon find himself in a more powerful position thanks to Bill’s holdings. If Ridge feels like Quinn will manipulate Eric into destroying the family business, he’ll do whatever it takes to stop the madness.

The Bold and the Beautiful intends on giving us plenty of conflict this week. It’s not just within the Forrester clan either. Brooke (Katherine Kelly Lang) and Katie could face additional tension, too.

When Bill starts getting nervous about Katie’s intentions, he’ll call in reinforcements. Bill’s right-hand man, Justin (Aaron D. Spears), will do his part to help. Bill will also reach out to Brooke in hopes of calming Katie down. He’ll realize that Katie could get riled up and try to stick it to him.

Since Brooke played a role in ending this marriage, she probably won’t want to butt in again. Bill will likely talk her into it though. Brooke is always trying to clean up messes, but sometimes she just creates bigger ones instead.

Katie will certainly be ready to fight for what’s hers. B&B’s latest promo shows Katie saying, “I know what I’ve earned and I’m gonna get it.” If everything goes according to plan, Katie could be set for life. This would be a taste of the revenge Katie’s been craving.

Katie knows the best place to hurt “Dollar Bill Spencer” is in his wallet. We’ll give you updates on the war that’s brewing. It sounds like it could mean bad news for Bill’s finances. Stay tuned and don’t forget to check CDL often for the latest Bold and the Beautiful spoilers, updates and news.