‘The Bold and the Beautiful’ Spoilers: Katie Steals Ridge From Brooke – Revenge is Sweet 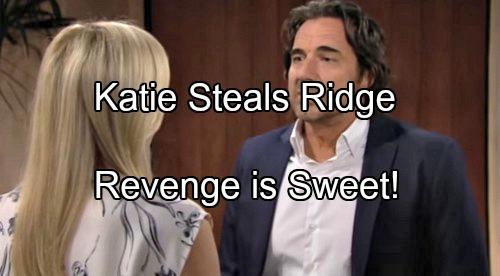 The Bold and the Beautiful (B&B) spoilers tease that Brooke (Katherine Kelly Lang) and Ridge (Thorsten Kaye) will continue to grow closer. They’ve both been through a lot recently and it’s helping them bond. Ridge just ended his marriage to Caroline (Linsey Godfrey) so she could raise her son with Thomas (Pierson Fode). He didn’t want to interfere with their connection.

Likewise, Brooke believes she’s caused enough trouble in Katie’s (Heather Tom) life. After Bill’s (Don Diamont) affair with Brooke blew up, he took Will (Zane Achor) away from Katie. Brooke stood up to Bill and demanded that Will be returned to his mother. She suggested that she’d never look at Bill the same way after watching him pull this stunt.

Of course, “Brill” is never really over for good. They’ll probably get their umpteenth chance eventually, but Brooke seems like she’s backing off for now. That frees her up for a Ridge reunion. B&B definitely appears to be laying the groundwork.

However, Katie is pretty fed up with Bill over his actions. She washed her hands of Bill after the truth came out. What does that mean for Katie’s love life? Who might be her new leading man? Katie may have her eye on Ridge soon and her motivation might be revenge on Brooke.

Sure, Brooke stepped up and forced Bill to drop the custody dispute. That doesn’t excuse the fact that Brooke was willing to sneak around with Bill and lie about it repeatedly. Katie’s wounds are still fresh and she may decide she wants her sister to pay.

Let’s say Katie notices that Brooke and Ridge are getting awfully cozy. Maybe Katie could swoop in for some warm moments as well. Would Katie be willing to steal Brooke’s man in retaliation for the destruction of her marriage? Could Katie give her sister a taste of her own medicine?

The Bold and the Beautiful is reestablishing a solid foundation for Brooke and Ridge. We have to have that or a vengeance scheme wouldn’t work. Once Ridge and Brooke become more than friends, Katie could make her move.

It would be fun if Katie staged a flashy reveal of her fling with Ridge. Unlike Brooke and Bill, Katie could try to get caught. She would want her sister to feel the same pain she felt. On the other hand, that could be Katie’s original plan until she actually fell for Ridge again.

Many Bold and the Beautiful viewers would like to see a Ridge and Katie pairing revisited anyway. That might drive Brooke back into Bill’s arms. Bottom line, another love triangle for the Logan sisters could spark some great drama. We’ll give you updates if we hear any news about this possibility.

So B&B fans, what do you think about Ridge and Brooke’s reconnection? Could Katie spoil Brooke’s reunion by pursuing Ridge herself? Does Katie deserve an opportunity for payback? Who do you want Ridge to end up with? Voice your opinion in the comments below and don’t forget to check CDL often for the latest Bold and the Beautiful spoilers, updates and news.