The Bold and the Beautiful (B&B) Spoilers: Liam Goes Missing from Cabin While Quinn at Steffy and Wyatt’s Wedding 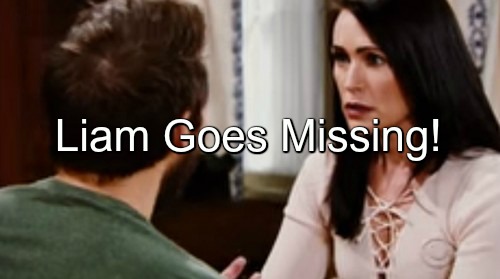 “The Bold and The Beautiful” (B&B) spoilers indicate trouble ahead on this week’s episodes for Quinn Fuller (Rena Sofer) and her amnesiac lover Liam Spencer (Scott Clifton). Looks like Quinn could soon lose control of her boy toy and the whole plot will spiral out of control.

Two factors should play into Quinn’s downfall – and could result in Liam going missing from the cabin. The Bold and the Beautiful spoilers say that one is that Deacon Sharpe (Sean Kanan) did not go splat on the rocks as Quinn hoped. Seems like Deacon has to be lurking somewhere planning revenge.

B&B spoilers warn that the second is that in coming days episodes, Liam will continue to question his past, has memories resurfacing of a face that’s not Quinn’s, and becomes suspicious when “Eve” continues to discourage him from remembering while planning for them to leave LA together.

This week will see the wedding of Wyatt Spencer (Darin Brooks) and Steffy Forrester (Jacqueline MacInnes Wood). As the festivities kick off, The Bold and the Beautiful spoilers say we’ll see Liam sketching out the face from his memories. At about the time Wyatt and Steffy are pronounced man and wife, we’ll see Liam has drawn Steffy’s face!

Quinn will be gone from the cabin at this point since she can’t miss her son’s wedding. This means Quinn won’t be there when Liam has this major breakthrough. And that would be the perfect time for Deacon to show up and wreak havoc in the crazy little life Quinn has set up in Topanga Canyon.

Sure Deacon could grab Quinn and choke her to death, but that’s not nearly enough to satisfy Deacon. He’s hurt, betrayed, and – not to forget – nearly died at Quinn’s hands all because she loved Liam, not Deacon, and was willing to kill to get to keep her brain-addled lover.

The better way for Deacon to exact revenge is to go after Liam – not to hurt him but to help him regain his memories so Liam will realize what Quinn has done to him (and with him over and over in her bed) so he’ll be horrified, dump Quinn and leave her broken hearted.

Will Deacon show up at the cabin to see Liam knowing that Quinn will be gone for hours for the wedding? Will Deacon tell Liam he knows whose face that he’s drawn? The Bold and the Beautiful spoilers ask if Deacon will lure Liam to his car promising him answers and put him out at Steffy and Wyatt’s wedding reception?

B&B spoilers reveal that Wyatt and Steffy will be officially married, but that doesn’t mean that all hell won’t break loose as soon as they are. Wyatt has to know that his mom Quinn knows more about Liam being MIA than she’s letting on. Come on, the yoga lie? Seriously?

And did you notice that Quinn encouraged him to hurry up and marry Steffy then Wyatt immediately told Charlie to forget the security footage of Quinn and Liam – and then he rushed home to talk Steffy into rushing to the altar.

What do you think B&B fans? Do you think Deacon will come and nab Liam from the cabin while Quinn is away? How freaked out would Quinn be if she came home and found her “Adam” is gone with no explanation – particularly if she sees the sketch he made of Steffy’s face?

Has Quinn run out of time? Will Adam run away from his Eve? Share your thoughts below and come back to CDL often for more “The Bold and The Beautiful” spoilers and news.