The Bold and the Beautiful (B&B) Spoilers: Liam Knocked Out on Plane, Awakens with Ivy Flying to Australia – Steffy Goes Insane 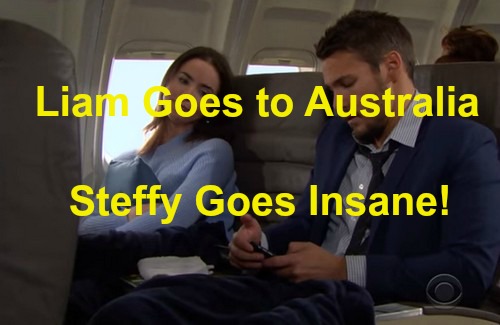 “The Bold and the Beautiful” spoilers reveal that Ivy (Ashleigh Brewer) will proceed with her plan to move back to Australia. After her latest fight with Steffy (Jacqueline MacInnes Wood), it will become clear that Ivy needs to leave town immediately. If nothing else, Ivy will want to avoid all these constant confrontations.

Of course, there’s also the matter of Ivy’s deep love for Liam (Scott Clifton). Ivy’s feelings aren’t going away and she can’t bear the pain of watching Liam be with someone else. Nevertheless, Liam cares about Ivy and he’ll want to make sure she’s safely seated on the plane.

It sounds like Ivy may get injured during her altercation with Steffy. Perhaps Ivy will be on crutches or Liam will simply fear that she’s a bit shaky. Whatever the case, “The Bold and the Beautiful” spoilers indicate that Liam will purchase a ticket so he can help Ivy board.

It appears a little of Ivy’s clumsiness will rub off on Liam. When Liam trips and hits his head, he’ll be knocked out by the blow. Once Liam regains consciousness, he’ll realize he’s on his way to Australia with Ivy. Liam will be stunned, but what can he do? They’ll be headed to the land down under and he might as well enjoy the ride.

Meanwhile, Steffy will probably be hurt by Liam’s actions. First, Liam told Ivy he loved her and now they’re apparently going on a trip together. Steffy will obviously feel like she’s been deserted by Liam. This will start out as a misunderstanding, but could it turn into something more?

Ivy and Liam will be spending a lot of time alone, which could help them rekindle their spark.

Back in Los Angeles, Quinn (Rena Sofer) will immediately set a plot in motion. “The Bold and the Beautiful” spoilers say Quinn will put her matchmaking skills to good use. Wyatt (Darin Brooks) and Steffy will find themselves being pushed closer by Quinn’s magical mom force.

The question is: will Quinn’s strategy achieve the desired result? Since Steffy will be feeling vulnerable after being ditched by Liam, Wyatt might have a shot. B&B viewers will be anxious to see if some partner swapping is in the works. Stick with the CBS soap for updates on these shifting couples.

So B&B fans, what do you think about the news that Liam will accidentally accompany Ivy to Australia? How will Steffy react when Liam jets off? Will Quinn help Wyatt swoop in for his chance? Voice your opinion in the comments below and don’t forget to check CDL often for the latest “Bold and the Beautiful” spoilers, updates and news.