The Bold and the Beautiful (B&B) Spoilers: Liam Proclaims Love for Quinn – Surrogacy Battle for Zende and Nicole 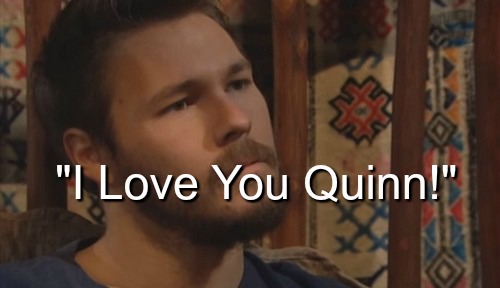 “The Bold and the Beautiful” spoilers for Friday, February 26, tease that Quinn (Rena Sofer) will defend her new relationship. Deacon (Sean Kanan) will say Quinn is delusional if she thinks she can maintain this faux romance indefinitely. Eventually, “Adam” (Scott Clifton) is going to realize that he’s been sleeping with crazy Quinn instead of his loving wife, “Eve.”

Quinn will insist that she knows the names and stories are fake, but the love they share is real. B&B spoilers say Quinn will let Deacon know that she truly cares about this version of Liam (Scott Clifton). She’ll declare that this relationship is far from what she experienced with Deacon. After they get their insults out of the way, Deacon will come around on the idea of helping Quinn maintain her perfect new life.

Later, “Adam” will admit that he’s fallen for “Eve” as well. Liam assumes he’s forgotten about his marriage to Quinn and she’s been helping him rediscover it. In reality, Quinn is just making it up as she goes along. Quinn created an elaborate tale for Liam that included his time in foster care and a fire that destroyed most of their photos. It seems Quinn’s excuses aren’t causing any major doubts for Liam at the moment.

“The Bold and the Beautiful” spoilers reveal that Liam will tell Quinn that he loves her. That should be exactly what Quinn wanted to hear. If Deacon gave Quinn any reservations about keeping this scheme in play, they’ll probably evaporate once Liam utters those magic words. Quinn is smitten and it appears the feeling is mutual.

Meanwhile, we’ll see trouble in paradise for Nicole (Reign Edwards) and Zende (Rome Flynn). Their romantic evening will take a wrong turn when Zende points out a fact regarding the surrogacy. Zende will think it’s crazy that Nicole is actually closer to Rick (Jacob Young) than she is to him. There’s a good chance that comment will prompt a strong reaction from Nicole.

Despite what Zende believes, Nicole will think she’s simply giving Rick and Maya (Karla Mosley) a huge gift. That’s all there is to it. Zende will contend that Nicole is carrying a piece of Rick inside her. He’ll become fed up at how he’s been placed on the backburner.

It’s starting to look like the end is near for Zende and Nicole. You can bet that Sasha (Felisha Cooper) will take Nicole’s spot as soon as an opportunity arises. Stick with “The Bold and the Beautiful” for updates on Sasha’s next seduction attempt.

So B&B fans, what do you think about the news that Liam will proclaim his love for Quinn? Will Liam feel torn once he finally learns the truth? What about Zende and Nicole’s problems? Will they decide to give up on their future together? Voice your opinion in the comments below and don’t forget to check CDL often for the latest “Bold and the Beautiful” spoilers, updates and news.