‘The Bold and the Beautiful’ Spoilers: Liam Resumes Fight for Steffy, Plays Dirty For Love – Katie Rips Into Brooke 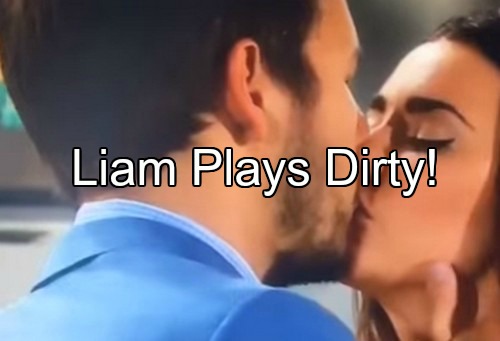 The Bold and the Beautiful (B&B) spoilers for Friday’s episode, July 8, tease that Katie (Heather Tom) will rip into Brooke (Katherine Kelly Lang) for putting her through endless pain. Now that Katie knows the truth, she’ll insist on getting everything out in the open.

Katie will make sure Brooke realizes just how much she hurt her.

Brooke will feel guilty for causing Katie’s anger and sorrow, but she’ll do her best to defend her actions. The Bold and the Beautiful spoilers say Katie will suggest they should take an unpleasant trip down memory lane. She’ll remind Brooke of her previous disloyalty and mention that this might be the worst betrayal yet.

Katie thought that they had finally worked through all of their issues. She assumed her marriage was secure, but Brooke’s lingering feelings for Bill (Don Diamont) ruined everything. Brooke should’ve been able to control herself like a mature adult.

Instead, she started sneaking around with Bill like an impulsive teenager.

Brooke will admit she had reservations about deceiving Katie and tried to break things off. Katie will believe Brooke should’ve tried harder. There’s probably no way their bond can ever truly be repaired. Katie doesn’t trust Brooke and at this point, she doesn’t even want to make the effort.

B&B spoilers say these sparring sisters will address how they’re going to move forward. The future certainly looks dim. Meanwhile, Liam (Scott Clifton) will be convinced that his own future is quite bright.

He’ll decide he needs to do whatever it takes to woo Steffy (Jacqueline MacInnes Wood) away from Wyatt (Darin Brooks).

Now Liam knows even a couple like Bill and Katie could fall apart. He’ll determine that marriage doesn’t always mean you’re with the person you’re supposed to be with. The Bold and the Beautiful spoilers say Liam will be willing to play dirty if he has to.

Liam cares about his brother, but he’ll contend that Wyatt brought this on himself.

Wyatt never should’ve pressured Steffy to marry him when she was still struggling to let go of Liam. She obviously had doubts, but Wyatt let Quinn (Rena Sofer) push him into this union. Of course, Wyatt loves Steffy and wants to make her happy.

He’s trying to be the husband she needs, but it seems only Liam can fill the void in Steffy’s heart.

The Bold and the Beautiful spoilers reveal that Liam will confront Steffy about their connection. He’ll indicate that he can still feel it and he knows Steffy can, too. Liam will refuse to give up his pursuit. If Liam keeps at it, he just might wear Steffy down.

It sounds like the battle between Wyatt and Liam is back on. This Spencer war could get ugly. Plus, Bill hinted that there could be consequences to Liam’s recent intrusion. Bill feels like Liam poked his nose where it didn’t belong.

He thinks Liam should’ve stayed out of the affair mess.

Will Bill make Liam pay the price? Will Wyatt team up with Bill to keep Liam away from Steffy? We’ll give you updates as we get more news on this hot plot. Stay tuned to B&B and don’t forget to check CDL often for the latest Bold and the Beautiful spoilers, updates and news.