BY Monica DelRay on April 22, 2016 | Comments: one comment
Related : Soap Opera, Spoiler, Television, The Bold and the Beautiful 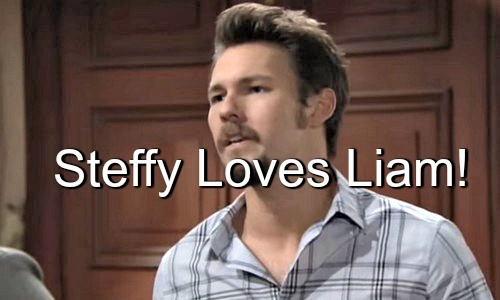 “The Bold and the Beautiful” (B&B) spoilers tease that Liam (Scott Clifton) will soon be a man with a plan. Thanks to Quinn (Rena Sofer), Liam’s life was left up for grabs and Wyatt (Darin Brooks) quickly snatched it. Now Liam has been given the challenge of getting it back.

Fortunately, Liam doesn’t intend on sitting around and sulking. He’ll come up with several ideas on how to reclaim what he’s lost. Where there’s a will, there’s a way. “The Bold and the Beautiful” spoilers indicate that Liam will rev up the romance to woo Steffy (Jacqueline MacInnes Wood). Liam knows that Steffy still loves him.

He just has to convince her to ditch Wyatt.

Liam probably won’t feel guilty about taking back what he believes is rightfully his. Since Liam doesn’t remember breaking off the engagement, he feels like Wyatt’s the interloper. It wasn’t Liam’s fault that he was held captive by Quinn for months. Likewise, he never sent Steffy those nasty texts or the hateful voicemail.

Liam was a victim in all of this, but so was Steffy. She had no reason to doubt that Liam was completely over her. As for Wyatt, he was perhaps a partial victim. Although Wyatt wasn’t in the loop on the actual plot, he should’ve at least passed along the security footage news.

If Liam was spotted in the parking lot with Quinn, Steffy deserved to know about it.

Plus, Wyatt seemingly took advantage of a very vulnerable Steffy. Supporting a friend is one thing. Proposing and marrying her ASAP is quite another. Still, Wyatt came to Liam’s rescue and refused to let Quinn continue tormenting him. B&B viewers have to give Wyatt a few points for that.

In the end, Steffy will have to decide if she’s willing to hurt Wyatt to secure her own happiness. Steffy feels like she should honor her commitment, but is that really fair? Wyatt and Steffy’s marriage was based on Quinn’s deception.

Let’s face it: if Liam had showed up before they said their vows, there’s no way Steffy would be married to Wyatt right now. Nevertheless, Steffy made a choice while Liam was gone and she’s about to make another one. She’ll have to determine what the rest of her life is going to look like.

Does Steffy truly see a future with Wyatt? Time will tell, but Liam will do everything he can to make sure Wyatt gets dumped. The pull of Liam’s love may be too strong to pass up. Steffy might find herself tempted to cheat on Wyatt already! Stick with “The Bold and the Beautiful” for updates on Steffy’s next move.

So B&B fans, what do you think about Liam’s pursuit of Steffy? How will Liam woo her? Will he pull out all the stops? Will Steffy struggle to remain faithful to Wyatt? Voice your opinion in the comments below and don’t forget to check CDL often for the latest “Bold and the Beautiful” spoilers, updates and news.