The Bold and the Beautiful (B&B) Spoilers: Nicole Lashes Out at Sasha After Zende Confession – Sister Secret Revealed? 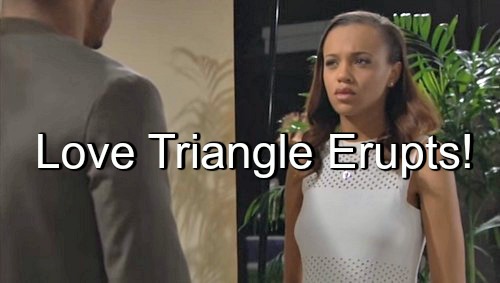 “The Bold and The Beautiful” (B&B) spoilers indicate that Nicole Avant (Reign Edwards) is due for a nasty shock on tomorrow’s episode, March 23, and it all has to do with Sasha Avant (Felisha Cooper) and Zende Forrester (Rome Flynn).

Looks like Zende didn’t just sleep with Sasha – it turns out the duo are dating and in the early stages of a relationship. Zende decides to come clean to Nicole before she finds out some other way and this sends Nicole into a tailspin.

Nicole has a right to be angry since Zende had just broken up with her and then moved on with Sasha almost right away. However, Nicole also knew when she decided to carry Rick Forrester’s (Jacob Young) baby that it would not be easy on Zende.

The Bold and the Beautiful spoilers remind us that Zende made it clear he couldn’t wait out the pregnancy and even though he cared about her, couldn’t put his life on hold until all this was done. Plus, Zende would not have likely jumped right into another relationship if his new woman hadn’t jumped right on top of him.

Let’s be real – Sasha would not take no for an answer. In fact, Zende said no several times but Sasha just kept undressing and tempting him. When Zende finally caved, even Sasha may have been surprised. And even though Sasha offered a no-strings good time, Zende’s not a casual guy.

No doubt Sasha is thrilled that they’re dating. That’s the second stage in her LA success plan. First is the modeling job at Forrester and now she’s got a handsome guy with a good career and impressive last name. But B&B spoilers as if Zende telling Nicole about them derail all of that?

Nicole will come to confront Sasha about stealing her man but Sasha feels like she didn’t steal anything. In her defense, Zende broke up with Nicole before he and Sasha slept together. However, Sasha made the offer before their split – hopefully Zende will leave that part out of it.

But if Nicole got Sasha fired from her modeling job out of jealousy before, B&B spoilers ask what Nicole do now? Will Nicole be content with chewing Sasha out about moving in on Zende the second they split? Or will Nicole call off their friendship and try to get her fired again by influencing Rick?

And just how much will Sasha take from Nicole before she snaps and tells her the sister truth? Sasha has watched Nicole get everything from Julius Avant (Obba Babatunde) all these years while she was his neglected secret child who got nothing but neglect and shame.

Of course, that’s not Nicole’s fault, but it’s hard for Sasha because, in her mind, Nicole has a family, is their father’s favorite, and now has this great new life in LA. Meanwhile Julius keeps rejecting Sasha, telling her she doesn’t belong there, and ordering her back to Chicago.

All of this is a festering ugly sore spot that will explode on this week’s epsiodes. Sasha will not keep Julius’ secret indefinitely. If Nicole will just let Sasha have the job and the guy it might blow over. But since Nicole is hormonal, mad and feeling insecure, she’ll come after Sasha hard.

Will Sasha tell Nicole she can ditch her as a friend but she’s not going to be out of her life since they’re really sisters? How bitter will the confrontation between Nicole and Sasha be? Will this be the end of the BFFs?

Will Sasha spill the sister secret? Share your comments below on the upcoming Nicole and Sasha confrontation. Be sure to check back with CDL every day for the most recent “The Bold and The Beautiful” spoilers and news.

Next on The Bold and the Beautiful Wednesday, March 23 2016