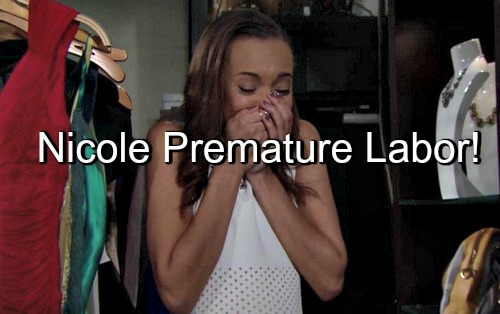 “The Bold and the Beautiful” (B&B) spoilers tease that major drama is on the way for the Avant family. After another confrontation with Julius (Obba Babatunde), it appears Sasha (Felicia Cooper) will finally decide she’s done letting her father control her.

If Julius won’t give Sasha the respect she deserves, she won’t see why she should keep his secret.

Will Sasha blab the truth to Vivienne (Anna Maria Horsford), Maya (Karla Mosley) and Nicole (Reign Edwards)? It sure sounds like the perfect event for May sweeps. Sasha is Julius’ daughter and she’s been ready to drop the bomb for a long time. B&B viewers should be prepared to watch everything explode.

Of course, we can’t forget that Nicole is pregnant. Any type of stress could put her baby’s life at risk. “The Bold and the Beautiful” spoilers suggest that Nicole may go into premature labor after an altercation with her spiteful sister. That would undoubtedly cause even more chaos.

Rick (Jacob Young) and Maya have been anxiously awaiting their bundle of joy. They’re thrilled that Nicole is giving them this amazing gift. If the baby doesn’t pull through, they’ll be crushed. At the very least, we’re probably looking at a lengthy fight in the NICU.

As for Nicole, this opens the door to other complications. Let’s say something goes wrong during labor. Perhaps the baby will survive, but Nicole will find out she can’t have any more children. How would Nicole feel if she wasted her only chance on Rick and Maya? Could Nicole fight them for her biological child?

We should see all kinds of strife come about thanks to Sasha’s actions. Zende (Rome Flynn) will likely blame Sasha for putting Nicole’s life and the life of her child in danger. It might push Zende right back into Nicole’s arms, but will she still want him?

In light of everything that’s happened, Nicole could fall into a deep depression. She may not want anything to do with Zende, Sasha or anyone else for that matter. Regardless, we’re in for some emotional scenes and exciting storylines. Stick with “The Bold and the Beautiful” for updates on what’s in store.

So B&B fans, what do you think about the news that Sasha and Nicole will have an intense showdown? Will Sasha blurt out the secret and send Nicole into premature labor? Will the baby live or die? Will Nicole’s world change forever?