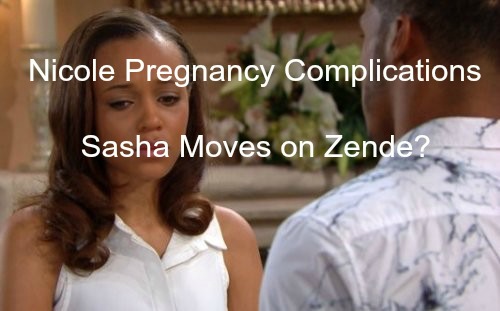 “The Bold and The Beautiful” (B&B) spoilers indicate that Nicole Avant (Reign Edwards) will soon start suffering some significant health impacts from her pregnancy that will incapacitate her. Looks like these will be more of an annoyance than life threatening, but still important because of the outcome.

These pregnancy issues will shake up Nicole’s life and open a door of opportunity for her supposed BFF Sasha Avant (Felisha Cooper) who sees this as her chance to get close to Zende Forrester (Rome Flynn). B&B spoilers indicate Zende grows closer to Sasha and feels the growing attraction.

Too bad Nicole will soon notice what her “friend” is up to – and will wonder if this means she needs to re-evaluate her relationship with Zende. After all, he promised to stick by her during this pregnancy but he’s flirting with her childhood friend as soon as Nicole has a major setback and could use his support.

Will Zende and Sasha try to reassure her that nothing is happening between them? Sasha doesn’t want to estrange Nicole (at least not yet) until she has her footing in LA. And Zende really doesn’t want to hurt Nicole, but he’s struggling with her carrying another man’s child – that’s just a fact.

How will this play out? We know that Sasha is upset that Julius Avant (Obba Babatunde) didn’t find a way to take her on the big trip to Hawaii and will lash out at her dad for leaving her behind. Will Nicole talk to her parents about Sasha’s antics?

Vivienne Avant (Anna Maria Horsford) will want to give Sasha the benefit of the doubt but Julius will not take lightly anything that Nicole says about Sasha. In fact, he could easily go confront Sasha about going after Zende if he finds out.

However, Julius will find in coming days that he is losing all control of his illegitimate daughter and will not be able to reign her in or stop her shenanigans. What’s sad in all of this is that it’s all Julius’ fault. He’s treated Sasha so poorly for so long that she’s lashing out.

And Nicole is the obvious object of her hatred because Julius loves Nicole so much – Maya Avant (Karla Mosley) is someone he tolerates but is still struggling to care about – so Nicole is Julius’ everything. Sasha is right to feel cheated, but Nicole is not to blame.

No matter – Nicole will be the one to pay for her dad’s mistakes – what’s that saying about the sins of the father being visited on his children? More than 18 years of Julius’ bad deeds are coming home to roost – and the fireworks will be spectacular.

What do you think B&B fans – will Zende fall for Sasha’s shady seduction tactics? Or will he realize she’s a vengeful gold digger and side step her? Nah. He’s a healthy young man – he’ll definitely be tempted. Watch B&B then come back to CDL for daily “The Bold and The Beautiful” spoilers, news and updates.