BY Heather Hughes on July 29, 2016 | Comments: one comment
Related : Soap Opera, Spoiler, Television, The Bold and the Beautiful 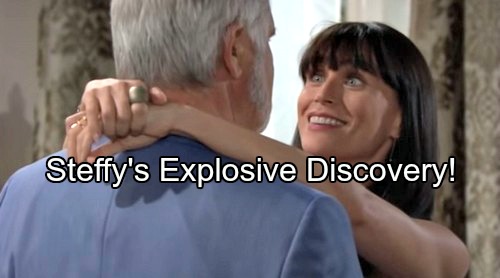 The Bold and the Beautiful (B&B) spoilers for Friday, July 29, tease that Eric (John McCook) will enjoy his happy reunion with Quinn (Rena Sofer). It seems Eric has changed his mind about the breakup. Once Eric saw his love, he couldn’t wait to kiss her. They’ll soon do much more back at the hotel.

However, Eric will insist that it’s extremely important to keep their romance a secret. Quinn can’t be seen hanging out in Monte Carlo. If this blows up, it could lead to disaster. Quinn will assure Eric that it won’t be a problem. She’ll suggest that she doesn’t even have to leave the room. Eric is all Quinn came for.

The Bold and the Beautiful spoilers say Quinn will talk to Eric about how she’s changed. She’ll believe she has Liam (Scott Clifton) to thank for that. Quinn will state that Liam showed her a better side of herself. Eric will love that this is the side he gets to see.

Later, Eric and Quinn will cuddle after a sex session. They’ll repeat that this has to be their secret. Steffy (Jacqueline MacInnes Wood) must remain out of the loop. Friday’s preview video shows Eric saying, “Steffy cannot find out. Absolutely not.”

Of course, Eric and Quinn’s plans aren’t going to pan out. They’ll eventually be caught by Steffy, but B&B has to do a little buildup first. The Bold and the Beautiful spoilers indicate that Steffy will share a tense moment with Wyatt (Darin Brooks). In the preview clip, Steffy says Wyatt needs to keep his mom “far, far away from me and my family.”

Wyatt (Darin Brooks) will likely wonder if Liam’s claims are bothering Steffy. Liam thought he saw Quinn on the boardwalk, but Steffy argued that Quinn wouldn’t be caught anywhere near Monaco right now. Steffy might start to rethink that idea. She may realize that Quinn could easily pop up when she least expects it.

Regardless, the threat alone could be enough to put Steffy on edge. She’s tired of living her life this way. Steffy just wants Quinn to butt out and back off. There’s a chance that Steffy will also consider Liam’s warning about the social media campaign. He hinted that it would bring out crazies like Quinn.

Now that Liam has planted doubt in Steffy’s mind, she may open up to Wyatt about her fears. The Bold and the Beautiful spoilers say Wyatt will be surprised by how much influence Liam has on Steffy. She obviously values his opinion. In fact, Liam will offer more advice after the reveal of Quinn and Eric’s fling.

In the meantime, Liam will focus on his foundation. He’ll hope to really make a difference in the world. Perhaps Steffy could team up with Liam after things fall apart with Wyatt.

Will Liam and Steffy become a dynamic duo again? We’ll give you updates as other news emerges. Stay tuned to B&B and don’t forget to check CDL often for the latest Bold and the Beautiful spoilers, updates and news.