‘The Bold and the Beautiful’ Spoilers: Quinn and Steffy’s Battle Heats Up, Gets Dangerous – Who Will Win? – Vote In The Poll 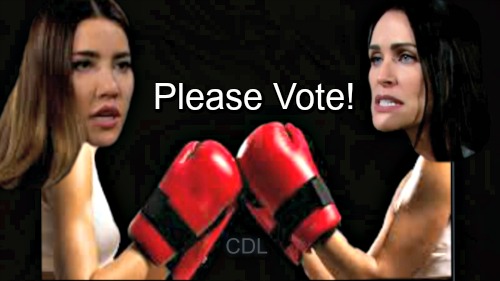 The Bold and the Beautiful (B&B) spoilers tease that the battle between Steffy (Jacqueline MacInnes Wood) and Quinn (Rena Sofer) will heat up. Both of these women can be quite stubborn and they always seem to find themselves at odds. It looks like this war has some twists and turns ahead.

Quinn enraged Steffy by keeping Liam (Scott Clifton) stashed at the cabin and making her believe she’d been abandoned. Steffy married Wyatt (Darin Brooks) and she cares about him, but she still resents Quinn for altering her life. Now Quinn has moved on with Eric (John McCook) and Steffy is drawing the line. She’s done putting up with Quinn’s constant craziness.

Steffy wants to be completely rid of Quinn and that led her to move out of Wyatt’s place. She just can’t take the risk anymore. Of course, Steffy isn’t really solving the problem. After all, Quinn will probably continue to date Eric. The Bold and the Beautiful spoilers suggest that Quinn and Eric won’t let anyone get in the way of their romance.

What’s Steffy going to do? Never see her granddad again? Steffy hates Quinn, but it’s tough to believe she’ll just cut Eric out because of her. Like it or not, Quinn may be worming herself into the Forrester clan. No one would be surprised if Eric proposed soon. At the rate their relationship is progressing, marriage could be on the horizon for this happy couple.

However, Wyatt will undoubtedly loathe what his mother has done. By making Wyatt lose Steffy, Quinn could ultimately lose Wyatt. That will likely take a toll on Quinn over time. She has Eric, but he may not be able to fill the void. Quinn loves her son and she’s used to having him stick by her, even when she’s in the wrong.

Quinn may decide to go after Steffy and possibly Liam for revenge. Steffy thinks she’s distancing herself from Quinn, but that plan may not work out. Quinn is pretty much inescapable, especially since Eric is her main squeeze now. Quinn might carry out a secret plot that will sabotage Steffy’s reunion with Liam and make her life utterly miserable.

If Eric found out, he’d realize everyone was right about Quinn all along. Eric might dump Quinn and allow each family member to deliver a big, fat “I told you so.” Steffy would be thrilled, but that would also make her even more of a target. Quinn will obviously be on the warpath if she loses both Wyatt and Eric’s love.

B&B viewers will be anxious to see who’s left standing at the end of all this conflict. It sounds like some major heartbreak warfare is coming on The Bold and the Beautiful. Quinn and Steffy could stir up serious trouble in each other’s love lives.

Which one’s blows will hurt the most? Will there be a clear winner in this battle? Will Steffy or Quinn come out on top? We’ll give you updates as other news emerges. Vote in our B&B poll and don’t forget to check CDL often for the latest Bold and the Beautiful spoilers, updates and news.