The Bold and the Beautiful (B&B) Spoilers: Quinn Arrested After Approaching Steffy – Locked Up for Crazy Crimes

BY Heather Hughes on May 11, 2016 | Comments: 5 comments
Related : Soap Opera, Spoiler, Television, The Bold and the Beautiful 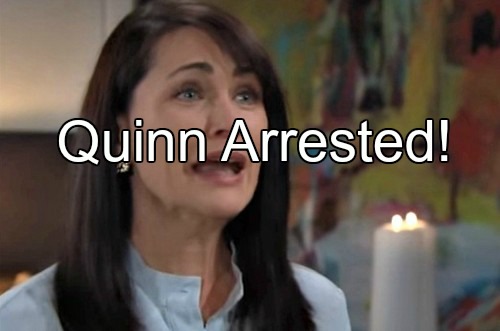 “The Bold and the Beautiful” spoilers tease that Steffy (Jacqueline MacInnes Wood) will be stunned when Quinn (Rena Sofer) shows up to see her on this week’s episodes. Quinn will hope that Steffy can help her earn Liam’s (Scott Clifton) forgiveness. She’s convinced that she might be able to snag a second chance if Liam will really hear her out.

Unfortunately, Steffy won’t appreciate Quinn’s plea. She won’t want to hear whatever wild thoughts are running through Quinn’s brain. Steffy is furious with Quinn for messing up Liam’s life as well as her own. Although Steffy cares about Wyatt (Darin Brooks), there’s no doubt that things would’ve been different without Quinn’s interference.

Liam let Quinn go after their confrontation, but Steffy will have another fate in mind. Once Steffy gets over the shock of seeing this mad woman, she’ll call for backup. After all, no one knows what Quinn is capable of anymore. She’s proven that she’ll stop at nothing to get what she wants.

“The Bold and the Beautiful” spoilers indicate that the cops will arrive and make an arrest. Quinn will be hauled off to jail, where she’ll obviously lament her lost love. Will Quinn remain in the slammer? Deacon (Sean Kanan) might want to help Quinn out, but he seems to be flat broke. It would be tough for Deacon to come up with the bail money.

However, there’s a possibility that Liam will take pity on Quinn and drop the charges. B&B spoilers suggest that Liam will handle this situation in a surprising way. Could Liam decide to let Quinn off the hook?

Liam and Quinn shared something special at the cabin. Even though it was a charade at first, Quinn actually fell for Liam and began to care about him. If a little piece of Liam still cares as well, it could help Quinn secure her release.

Whether this goes to trial or not, Quinn definitely has a mess on her hands. Will Quinn manage to wiggle out of another jam? Stick with “The Bold and the Beautiful” for updates on what’s in store for this schemer.

So B&B fans, what do you think about the news that a stunned Steffy will have Quinn arrested? Will Quinn truly pay for her crimes or will she get out of this somehow? Voice your opinion in the comments below and don’t forget to check CDL often for the latest “Bold and the Beautiful” spoilers, updates and news.