‘The Bold and the Beautiful’ Spoilers: Quinn Fears Eric’s Dying – Ridge Schemes as Others Face Guilt 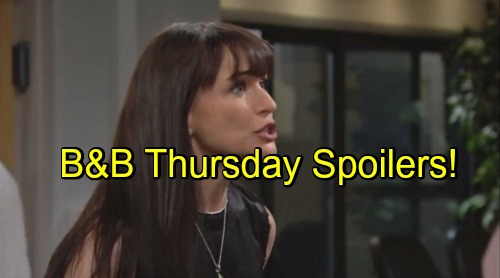 The Bold and the Beautiful (B&B) spoilers for Thursday, September 29, tease that Eric (John McCook) will be rushed to the hospital for immediate medical attention. Doctors will try to get to bottom of Eric’s health crisis as soon as possible, but Quinn (Rena Sofer) will quickly grow impatient. She’ll fear that Eric could be gravely ill.

Thursday’s B&B preview video shows Quinn shouting, “Would you just answer me?! He’s my husband!” It sounds like no one will be spilling any info on Eric’s condition. Perhaps it’s still a bit of a waiting game at this point. In the meantime, Eric’s loved ones can pass around some blame.

The Forresters hold Quinn responsible for starting the feud, but they’ll have to admit that they played a part in Eric’s current dilemma. If the family had just shown up at the wedding, Eric wouldn’t have gone berserk and collapsed. Pam (Alley Mills) will feel especially guilty for refusing to attend the ceremony.

The Bold and the Beautiful spoilers say Pam will hate that she let Ridge (Thorsten Kaye) talk her into leaving the mansion. This wedding meant a great deal to Eric. Pam will wish she would’ve stayed and watched Eric marry his love. She’ll contend that she shouldn’t have let her feelings about Quinn get in the way. 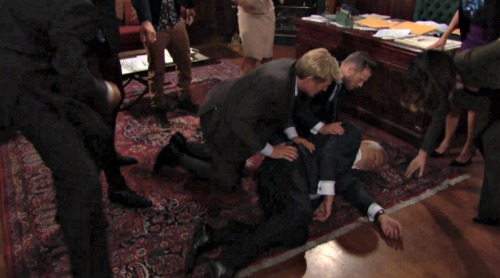 After all, Pam hasn’t always been as stable as she is now. She’ll mention that no matter how nutty she got, Eric never held it against her. As Pam frets, Thomas (Pierson Fode) will chime in. He’ll insist that they’re all at fault. They never should’ve pushed Eric so hard on this.

Maya (Karla Mosley) will agree that they chose the wrong strategy and it ended in disaster. She’ll think it was terrible of them to put Eric in such a heartbreaking position. Wyatt (Darin Brooks) will make sure the Forresters hear his opinion. He’ll believe that Quinn is the only who has shown Eric any respect lately.

Eric’s family members have been treating him like a senile outsider. Will they finally accept that Eric is the one calling the shots in his own life? Some Forresters will, but not all of them. Steffy (Jacqueline MacInnes Wood) will continue to harass Quinn for messing everything up.

Ridge will also refuse to back down on the Quinn issue. He didn’t want Eric to face a medical scare, but that won’t stop him from capitalizing on an opportunity. The Bold and the Beautiful spoilers indicate that Ridge will do whatever it takes to protect the family and the company. If that means getting sneaky, then so be it.

At some point over the next few days, Carter (Lawrence Saint-Victor) will make a shocking discovery. He’ll realize that Eric changed his healthcare proxy from Ridge to Quinn. Ridge will urge Carter to keep that news to himself and that will inevitably cause trouble.

Things could get tricky thanks to Ridge’s scheme. We’ll give you updates as more details emerge. Stay tuned to B&B and don’t forget to check CDL often for the latest Bold and the Beautiful spoilers, updates and news.

Our hearts are heavy with the loss of #DaytimeTV pioneer #AgnesNixon. Our thoughts are with her family and fans. #BoldandBeautiful