‘The Bold and the Beautiful’ Spoilers: Quinn Fights for Love, Steffy Wants Rid of Psychopath – Sasha and Thomas Cozy Up 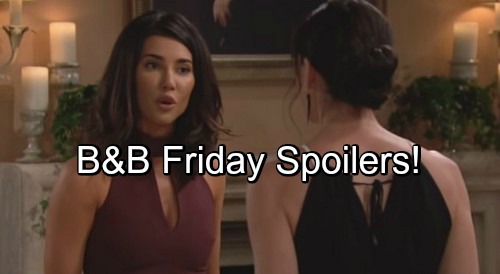 The Bold and the Beautiful (B&B) spoilers for Friday, August 19, tease that Wyatt (Darin Brooks) and Quinn (Rena Sofer) will have an explosive confrontation. Quinn told Wyatt that she was finally putting her own needs above his. Her new perspective isn’t going to go over very well. Wyatt will insist that Quinn can’t let this happen. His marriage is about to go down in flames.

Friday’s preview video shows Quinn angrily asking, “What am I supposed to do?! Just give him up?!” Wyatt will fire back that it’s exactly what she’s supposed to do. Quinn’s relationship with Eric (John McCook) is just something that Steffy (Jacqueline MacInnes Wood) can’t accept. This is a deal-breaker and Wyatt will want Quinn to understand that.

The Bold and the Beautiful spoilers say Wyatt will try one more passionate plea. He’ll hope that Quinn will reconsider and put a stop to her romance. Wyatt will state that Quinn brought Steffy into his life and he’ll ask her not to be the reason she leaves it. Quinn will feel for Wyatt, but it doesn’t look like she’s going to change her mind.

Meanwhile, Steffy will focus on another strategy. She’ll intend on talking to Eric until he realizes he’s dating a psychopath. That tactic probably won’t work either. Eric is head over heels for Quinn and he wants to move forward as a couple.

Later, Steffy will return to her previous plan of threatening Quinn. The Bold and the Beautiful spoilers reveal that Steffy will show up at the mansion for an epic outburst. She’ll rant about Quinn’s manipulation and demand immediate changes.

Steffy will snap that Quinn took Liam (Scott Clifton) away and she’s not going to let her take Eric away, too. It’s clear that Steffy is a woman on a mission. Steffy will order Quinn to get out, but her mother-in-law isn’t going anywhere. Of course, Quinn may not bear that title for much longer.

Steffy will soon vow to divorce Wyatt if Quinn refuses to end things with Eric. Will Quinn cave in or is Wyatt’s marriage doomed? Stick with the CBS soap for updates on all of the family tension. 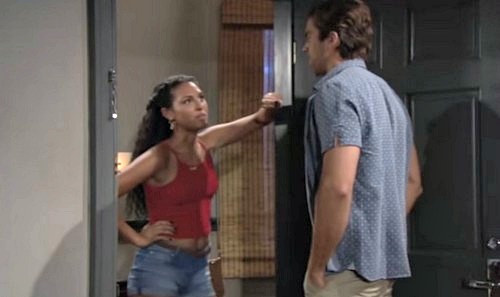 Other B&B spoilers indicate that Sasha (Felisha Cooper) will stop by Thomas’ (Pierson Fode) place. She’ll suspect that Thomas might be looking for some company. Thomas will welcome the distraction. There’s been a lot going on for the Forresters lately.

Between the corporate drama and Thomas’ personal troubles, he could use a break. Sasha and Thomas will share a meal while they continue to get to know each other. Thomas will discuss how he’s feeling now that Caroline (Linsey Godfrey) and Douglas are out of the picture. Caroline promised she wouldn’t stay away too long, but Thomas still fears the unknown.

Sasha will assure Thomas that he has a bright future ahead of him, even if Caroline isn’t in it. Naturally, Sasha is starting to see herself as Thomas’ leading lady. She’ll do her best to grow closer to Thomas and make him view her as his perfect match.

It sounds like some exciting scenes are coming up. We’ll keep you posted as more news emerges. Stay tuned to B&B and don’t forget to check CDL often for the latest Bold and the Beautiful spoilers, updates and news.