‘The Bold and the Beautiful’ Spoilers: Quinn Flies to Monte Carlo With Special Guest Stars – Deacon Warns of Big Trouble 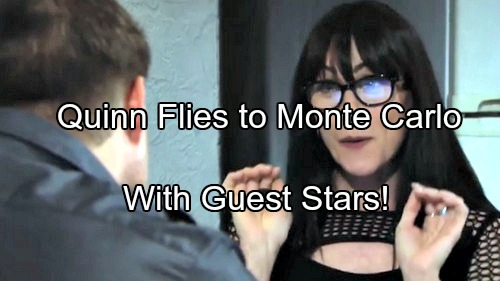 The Bold and the Beautiful (B&B) spoilers tease that on new episodes during the week of July 18 Wyatt (Darin Brooks) and Steffy (Jacqueline MacInnes Wood) will lay out the plan for the Spencer Summit. They’ll want this event to be a success, but there’s lots of work to be done. For starters, they need a guest speaker who can really set the tone.

After mulling it over, Steffy and Wyatt will figure out the perfect person for the job. We don’t know for sure who they’ll select, but we know Eric (John McCook) will be attending this trip. Since Eric just resumed his role as CEO of Forrester Creations, perhaps he could speak about longevity in business.

Regardless, Eric will be headed to Monaco soon. The Bold and the Beautiful spoilers say someone else will start planning a trip once she hears the news. Of course, you know we’re talking about Quinn (Rena Sofer). When has Quinn ever missed an opportunity to stir up trouble? She’ll have her bags packed in no time.

Quinn will give Deacon (Sean Kanan) updates on her intentions and he’ll instantly shoot down the idea. Deacon will insist that something is bound to go wrong. He’ll point out that Steffy hates Quinn with a passion. Because of Eric’s connection to Steffy, he wants Quinn to steer clear as well.

It seems like a surefire way to make Quinn do something is to tell her not to. B&B spoilers indicate that Quinn will book a flight and prepare to follow Eric. Deacon will give Quinn plenty of reasons to stay home, but she won’t change her mind. She’s going to Monte Carlo and she won’t care what anyone else thinks.

Quinn will eventually board a plane at LAX. She’ll be seated next to some intriguing characters. The Bold and the Beautiful spoilers reveal that some special guest stars will be on hand for the journey. Monica Horan from Everybody Loves Raymond and Jim O’Heir from Parks and Recreation will portray an eccentric couple.

Quinn will find herself sandwiched in between this humorously obnoxious duo. We’ll learn that their names are Kieran and Matt, but Quinn will just call them annoying. It should be fun to see how this plays out. B&B fans should expect even more amusement once Quinn lands in Monaco.

The show is keeping most of the details under wraps, but it sounds like several significant episodes are in the works. If Quinn is going to surprise Eric, could she accidentally surprise some other characters as well? There’s a chance that someone will find out about Eric and Quinn’s relationship while they’re away.

Quinn tends to cause problems when she’s out of town. We all remember when Quinn pushed Ivy (Ashleigh Brewer) into the Seine during their Paris getaway. What mayhem will Quinn cause in Monte Carlo? It’s tough to say. Maybe Quinn will even get a taste of her own medicine.

When Steffy sees Quinn, she’s not going to be happy. If Steffy finds out Quinn is having a fling with Eric, that would make things even worse. Quinn might find herself on the receiving end of drama this time around.

We’ll all be looking forward to these exciting episodes. Anything related to Quinn is usually a big draw. Stay tuned and don’t forget to check CDL often for the latest Bold and the Beautiful spoilers, updates and news.