‘The Bold and the Beautiful’ Spoilers: Quinn Gets Sexy for Her Man, Wyatt Suspicious of Mom’s Glow – More Trouble Brewing! 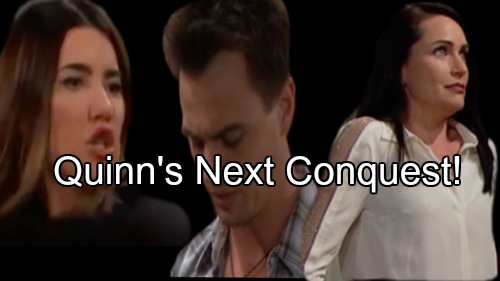 The Bold and the Beautiful (B&B) spoilers tease that Quinn (Rena Sofer) will pop up to give us some fun this week. She’s been wandering around aimlessly over the past few weeks. Ever since she gave up on Liam (Scott Clifton), Quinn just doesn’t know what to do with herself.

She wants to maintain a relationship with Wyatt (Darin Brooks), but Steffy (Jacqueline MacInnes Wood) isn’t interested in letting Quinn get too close.

Nevertheless, Quinn loves her son and she’s determined to spend time with him. Wyatt is a mama’s boy, so he’d probably be all for it if Steffy would stop pitching fits. Although Wyatt has been trying to appease Steffy, we all know he still thinks Quinn should have a place in his life.

Luckily, The Bold and the Beautiful spoilers hint that Quinn will finally find something (or someone) to do. B&B’s weekly promo shows Quinn undressing to reveal some sexy lingerie. Who’s the lucky guy? We wish it was Liam, but it seems likely that it’s Deacon (Sean Kanan).

Perhaps Quinn has decided to take advantage of the man who’s willing to put up with her craziness. If Deacon wants Quinn back after she shoved him off a cliff and into the ocean, it’s safe to say he’s a keeper. Quinn will show up at Wyatt’s place and he’ll take note of her positive glow.

He’ll worry that his mom might be up to something.

Quinn may suggest that she’s moving on with her life. She might state that she’s focused on getting a fresh start. Unfortunately, Steffy won’t appreciate Quinn’s visit to their humble abode. She’s made her stance clear plenty of times, but her point just isn’t sinking in for stubborn Quinn.

The Bold and the Beautiful spoilers say Steffy will hit the roof when she realizes Quinn is still dropping by. She’ll wonder what part of “stay away” Quinn didn’t understand. Just in case Quinn truly didn’t get the message, Steffy will lay it out for her once more. She’ll officially ban Quinn from their home.

This might be a terrible move on Steffy’s part. When Quinn is acting relatively normal, it’s better to let sleeping dogs lie. If they keep Quinn placated, everybody can keep humming along just fine. By attacking Quinn like this, Steffy runs the risk of stirring up trouble.

Quinn wants Wyatt to be happy and she believes Steffy is his perfect match. However, what happens if Steffy continues to push her mother-in-law out of the picture? Quinn might change her tune and take drastic action to stop Steffy from muscling her out.

Of course, Steffy has enough to deal with as it is. She’s trying to let go of Liam, but that may not be possible. Steffy will never forget the love they shared. If Liam eventually finds someone new, could jealousy pull Steffy away from her mediocre marriage? That would also incite Quinn’s wrath.

One way or another, Quinn is going to shake things up. A plot is always brewing. When will Quinn strike again? It’s a waiting game for now, but Quinn’s next scheme is sure to mean bad news. Stay tuned to B&B for updates on what’s in store.