The Bold and the Beautiful (B&B) Spoilers: Quinn Plans to Murder Liam With Deacon’s Help – Throw Lover Over Cliff 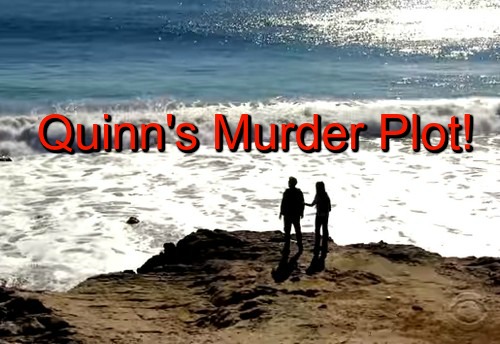 “The Bold and the Beautiful” (B&B) spoilers for Monday’s episode, March 14 next week tease that Quinn (Rena Sofer) and Deacon (Sean Kanan) will have a heated argument. Deacon just doesn’t see any way for Quinn to get out of this mess unless she gives Liam (Scott Clifton) his freedom. However, Quinn believes they have another option.

The Bold and the Beautiful spoilers warn that Quinn will insist that they have no choice but to murder Liam. Deacon will contend that Quinn is just trying to make a terrible situation even worse. He won’t understand how Quinn could even think such a thing.

Talk will turn to Quinn and Deacon’s relationship. Quinn will suggest that she ended their marriage because their marriage ended their romance. “The Bold and the Beautiful” spoilers say Quinn will snap that Deacon owes her a happy ending and he’s going to give her one. It appears Deacon will be in on this murder plot whether he likes it or not.

It’s doubtful that B&B plans on killing Liam off, but we could still see a death go down. They proved they had guts when Aly (Ashlyn Pearce) bit the dust. A newly released promo shows Quinn sightseeing on a cliff with Liam as Deacon lurks nearby.

Could Deacon get pushed over the edge by mistake? It’s a possibility to consider.

B&B spoilers reported that Sean Kanan was recently dropped to recurring status and has only been in a handful of episodes over the last few months. They might let Deacon die for the shock factor.

It could be an accident or maybe Quinn will realize she just can’t give up her new life with Liam. Since Deacon is on Quinn’s back to come clean, perhaps she could decide to give him a nudge off that cliff instead. Quinn might think of that as a “happy ending.”

In the meantime, B&B spoilers tease that Steffy (Jacqueline MacInnes Wood) will be concerned that something may have happened to Liam. She’ll just want to know that he’s alive. Steffy will feel like she can’t let go until she’s certain Liam is OK.

Will Quinn’s plot take away Steffy’s chance for closure or will the plan go awry? Stick with “The Bold and the Beautiful” for updates on the murderous mayhem.

So B&B fans, what do you think about the news that Quinn will try to eliminate her problem? Will this murder attempt have unintended consequences? Is there a twist coming up? Voice your opinion in the comments below and don’t forget to check CDL often for the latest “Bold and the Beautiful” spoilers, updates and news.