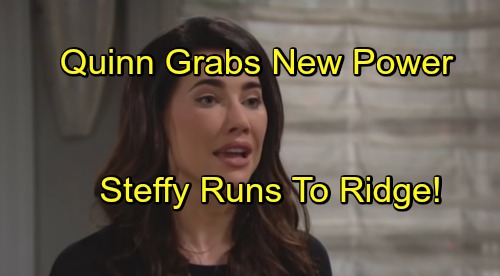 The Bold and the Beautiful (B&B) spoilers tease that Steffy (Jacqueline MacInnes Wood) will be desperate for advice. Her emotions are all over the place and she could use someone to talk to. Liam (Scott Clifton) would ordinarily dish out some words of wisdom, but he’s not a good option in this case.

Steffy already knows what her ex would tell her to do. It’s clear that Liam believes he’s a better match for Steffy, but she’s not sure that bailing on Wyatt (Darin Brooks) is the right call. B&B spoilers say Steffy will decide to seek guidance from her father. She’ll hope that Ridge (Thorsten Kaye) will tell her if she’s leaning the in the best direction.

Of course, Wyatt isn’t exactly Ridge’s favorite person at the moment. He’s angry that Wyatt made him come clean about Eric’s (John McCook) power of attorney. Now Quinn (Rena Sofer) is in charge and there’s nothing Ridge can do about it.

However, the truth would’ve come out sooner or later. Eric is finally starting to regain consciousness, which means he would’ve intervened at some point. Still, Ridge isn’t happy about how things have turned out. That may affect the advice he gives Steffy.

Besides, all of this really boils down to Quinn. If she would just walk out of Steffy’s life and never look back, Wyatt would get to keep his wife. When you consider Quinn’s history, it’s easy to see why Steffy is concerned.

No one should be surprised that Steffy is nervous about Quinn’s influence over her family and the company. Will Ridge suggest that leaving Wyatt is the only solution? It’s certainly possible. Ridge hates Quinn with a passion and he doesn’t want his loved ones around her. He may urge Steffy to file for divorce.

Still, Wyatt may not give up without a fight. Could something change that convinces Steffy to stick around? That’s another possibility to consider. The Bold and the Beautiful must have a few twists and turns in store.

As for Ridge, he’ll reluctantly make a major announcement. B&B spoilers say Ridge will gather the family to deliver some bad news. It sounds like everyone will learn that Quinn is in charge now. The Forresters will be determined to rectify this situation, but they can’t do anything immediately.

Quinn will probably get to revel in her victory for the time being. The Bold and the Beautiful spoilers reveal that we’ll continue to see this new-and-improved Quinn. She won’t have any terrible motives, but that doesn’t mean she’ll always make the appropriate choices.

Quinn tends to lose sight of the big picture occasionally. Will Quinn make any disastrous decisions while she’s in control? Will her good intentions somehow lead to trouble anyway? It should be interesting to see what’s coming up.

At least Quinn has Eric to get her through any rough times ahead. Let’s hope Quinn can keep Eric in her corner for a while. Quinn could head back to the dark side if her hubby turns against her. We’ll give you updates as other details emerge.

At least Maya’s portrait is still up… at the Paley Center exhibit! @cbsdaytime #1for30 @karlamose

THIS WEEK: Outwitted, outspoken and out of time…