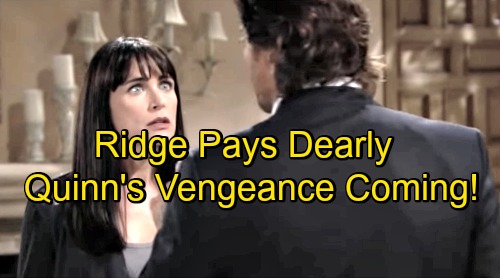 The Bold and the Beautiful (B&B) spoilers tease that Quinn (Rena Sofer) will feel like her dreams have been dashed. She’s determined to fight for Eric (John McCook), but Ridge (Thorsten Kaye) may end up dissolving her willpower briefly. Quinn is about to be more miserable than she’s ever been.

Of course, Quinn has loved and lost before. Losing “Adam” aka Liam (Scott Clifton) was traumatic, but she managed to get over it eventually. Eric undoubtedly played a big role in lifting Quinn out of that funk.

However, Quinn’s relationship with Liam was mostly about an infatuation. She tricked Liam into caring about her and she enjoyed that feeling. That’s really all there was to it. Quinn just hadn’t felt that loved and accepted before.

Once Quinn became involved with Eric, everything changed. Unlike Liam, manipulation wasn’t necessary with Eric. Steffy (Jacqueline MacInnes Wood) and Ridge obviously see their romance from a different angle, but that doesn’t change Quinn and Eric’s feelings for each other.

B&B fans watched Eric and Quinn find love in spite of the obstacles. Unfortunately, they’ll continue to face hurdles in the coming weeks. The Bold and the Beautiful spoilers indicate that Ridge will plan on taking Quinn to her lowest point. He’ll hope to make Quinn so fed up and depressed that she just throws in the towel.

Naturally, Ridge will use the power of attorney as part of his strategy. He might believe he’s invincible once he’s ostensibly in charge of all decisions regarding Eric and the company. Quinn will probably mope momentarily, but something may snap her back to reality. This tamed Quinn just can’t last forever.

Ridge always does this. He pushes and pushes until his whole scheme falls apart. Whether Ridge is dealing with Quinn or another formidable opponent, Ridge has a tendency to go one step too far. Then, Ridge’s mistakes inevitably come back to bite him. You can bet that Ridge will pay the price for his lies and harsh moves.

Even if Quinn manages to keep her cool, Eric will eventually wake up and begin the road to recovery. He won’t approve of what Ridge has done during this family crisis. What will Ridge’s punishment be? Eric might skip the irate lecture and calmly banish Ridge from the family – at least for the time being.

It would serve Ridge right for going against Eric’s wishes. While we wait on Eric’s bomb to drop, Quinn will get some help from Wyatt (Darin Brooks). The Bold and the Beautiful buzz hints that Wyatt’s behavior could surprise us. He’s been cautiously supportive of his mom lately, but he may decide that she deserves more.

Wyatt doesn’t like what Quinn did to Liam or the fact that she’s ruining his marriage to Steffy. Nevertheless, Wyatt can see real progress in Quinn. He needs to praise the changes or Quinn could head back in a devious direction.

Some good drama is on the way. We’ll give you updates as other news comes in. Stay tuned to B&B and don’t forget to check CDL often for the latest Bold and the Beautiful spoilers, updates and news.

TODAY: Ridge wants Quinn out of the mansion… pic.twitter.com/k62r1YoLfh