‘The Bold and the Beautiful’ Spoilers: Quinn Vents to Wyatt, Vows to Protect Eric from Forrester Family – Pam’s Meltdown 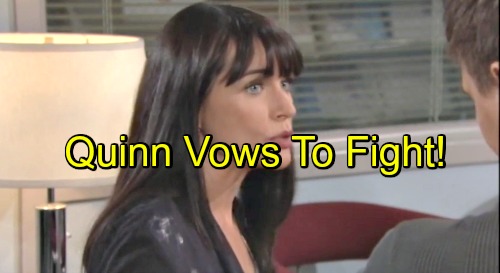 The Bold and the Beautiful (B&B) spoilers for Wednesday, October 5, tease that Ridge (Thorsten Kaye) will mull over his next move. A small part of Ridge probably wants to honor Eric’s (John McCook) wishes. His father placed Quinn’s (Rena Sofer) name on the power of attorney form. It’s clear that Eric wanted Quinn to be in charge of all the decisions.

However, the idea of Quinn having that much influence is just too scary for Ridge. He loves Eric, but he hates Quinn more. The Bold and the Beautiful spoilers say Ridge will talk Carter (Lawrence Saint-Victor) into keeping this secret. Ridge won’t want anybody to find out that Quinn should be the one in control.

Elsewhere, Quinn will gripe to Wyatt (Darin Brooks) about Ridge’s nastiness. B&B spoilers say Wyatt will be surprised to learn that his mom has been thrown out of the mansion. Quinn will add that Ridge is threatening to push her out of Eric’s life once and for all.

Wyatt will wonder what Quinn is going to do. She’s obviously stuck in a tricky situation. Things might be tough right now, but Quinn is determined to be there for her husband. She doesn’t care if this marriage is legal or not. Quinn intends on doing whatever she can to keep this relationship intact.

Wednesday’s preview video shows Quinn declaring, “I made a vow to protect Eric always and that’s exactly what I’m going to do…even if it’s from his own family.” Wyatt might be a little nervous when he hears that. Quinn has a tendency to go off the rails when she’s got something to prove.

Nevertheless, Wyatt understands why Quinn feels the need to fight. He’ll back her up as long as her strategy doesn’t get too crazy. Of course, Ridge will stand his ground. He’ll have Steffy (Jacqueline MacInnes Wood) in his corner as he works to keep Quinn out of the picture.

When Quinn dares to challenge Ridge, she’ll realize that she’s dealing with a formidable opponent. Quinn will struggle to handle the next stumbling block, but you’d better believe that she’ll come roaring back. If Quinn makes a power play, it could leave the whole Forrester family in shock.

In the meantime, Eric will have another visitor. The Bold and the Beautiful spoilers reveal that Pam (Alley Mills) will get emotional as she sits by Eric’s bedside. Pam will tearfully say she hopes Eric knows how much she appreciates him. She’ll be grateful for everything that Eric has done for her over the years.

Eric’s loved ones are still worried about what the future holds for him. His doctors aren’t sure what to expect, but B&B spoilers state that Eric will pull through eventually. How will Eric’s recovery affect his family members? You can bet that big changes are brewing.

It sounds like the Quinn chaos will continue in the coming weeks. We’ll give you updates as other news comes in. Stay tuned and don’t forget to check CDL often for the latest Bold and the Beautiful spoilers, updates and news.