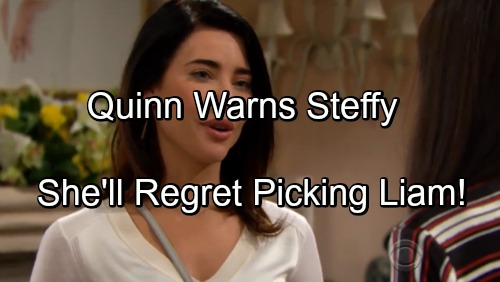 The Bold and the Beautiful (B&B) spoilers tease that Quinn (Rena Sofer) will cause a little mischief this week. She called a Thanksgiving truce with Steffy (Jacqueline MacInnes Wood), but she’ll be back to her old tricks soon enough. Of course, Quinn will probably be perfectly nice about it. The new-and-improved Quinn simply schemes with a smile.

Steffy knows how Quinn operates and she doesn’t like it at all. She’s tired of the constant manipulation, but she always lets Quinn get to her. It’s clear that Steffy would be better off walking away from almost any conversation with Quinn. Unfortunately, Steffy can’t seem to steer clear of her enemy.

Quinn typically finds a way to push Steffy’s buttons. She’s a pro when it comes to this sort of thing. The Bold and the Beautiful spoilers state that Quinn will refuse to give up her quest to help Wyatt (Darin Brooks). She still believes that Steffy and Wyatt’s marriage could work. Quinn wants Steffy to realize she chose the wrong man. 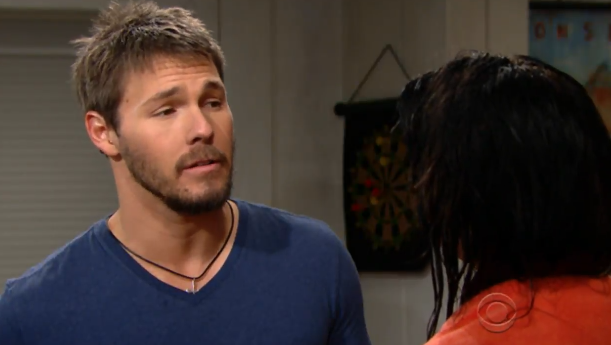 Steffy feels confident that her future lies with Liam (Scott Clifton). In fact, they’ll spend some time discussing it this week. Later, Steffy will run into Quinn and they’ll have a bit of a tiff. Quinn just won’t be able to resist stirring up some trouble. She’ll take the opportunity to put in a good word for Wyatt.

The Bold and the Beautiful spoilers say Quinn will bring up a few issues. She’ll maintain that Steffy is missing out on something special. Quinn could argue that Steffy will get bored with Liam by her side. She might think Steffy will lose her spark and they’ll be doomed to live a very vanilla life.

Quinn will contend that Wyatt would give Steffy plenty of romance and surprises. She’ll insist that Steffy had better not count Wyatt out just yet. Steffy will think all of this is ridiculous. She’ll remind Quinn that she never would’ve married Wyatt if Liam hadn’t been held hostage. 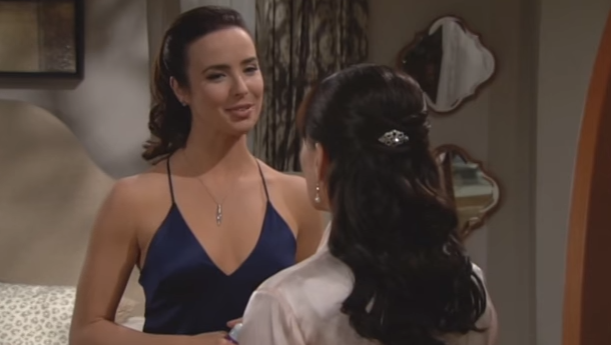 Still, Steffy may wonder if she’ll regret her choice someday. She can’t deny that Wyatt was passionate and loving. Steffy will attempt to shake her concerns, but Quinn won’t let this go. She’ll undoubtedly do whatever she can to make things right for her son.

Ivy (Ashleigh Brewer) could reenter the picture at some point. It appears she’s dropped out of the competition now that Liam and Steffy are back together. Quinn might call on her right-hand woman to help her out again. Ivy does whatever Quinn tells her these days.

Where is this B&B drama headed? There has to be a reason that Quinn is clinging to her dreams for Wyatt. This could be a risky mission for the newlywed. If Quinn gets caught carrying out a plot, Eric (John McCook) won’t be pleased.

Steffy and Liam are on solid ground at the moment. They might overcome the obstacles Quinn creates. It looks like Quinn may have the most to lose here. We’ll give you updates as more news comes in. Stay tuned to B&B and don’t forget to check CDL often for the latest Bold and the Beautiful spoilers, updates and news.

Next on #BoldandBeautiful… Proposals, ultimatums, and something totally unexpected. pic.twitter.com/cZt2vuFjGN