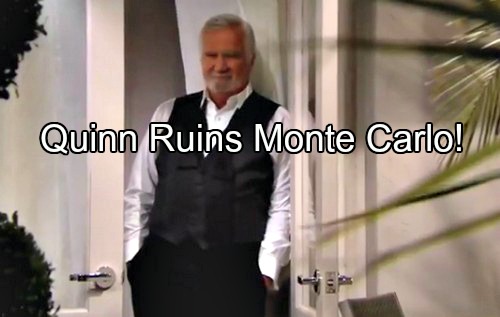 The Bold and the Beautiful (B&B) spoilers for the week of July 25-29 tease that the CBS soap is headed to Monte Carlo. The weekly promo promises bright lights, a sexy city and international intrigue. We have no doubt that they’ll deliver some fun and excitement during these special episodes.

Steffy (Jacqueline MacInnes Wood) will be particularly thrilled by this little getaway. She’s there to work with Wyatt (Darin Brooks) and Liam (Scott Clifton), but they’ll definitely mix business with pleasure. Steffy will joyfully shout that they’re in Monaco and they can do whatever they want.

It’s clear that Steffy intends on enjoying a break from the stress of Quinn (Rena Sofer) and her shenanigans. She’ll don a bikini and spend time at the beach with Wyatt. They’ll knock back a few drinks and share some playful moments on their lounge chairs.

Unfortunately, Steffy’s visions of a Quinn-free vacation aren’t going to pan out. The Bold and the Beautiful spoilers say Quinn will be determined to join Eric (John McCook) on this romantic adventure. Terrible news will threaten to throw off Quinn’s scheme, but she won’t let it rain on her parade.

B&B’s promo shows Quinn looking at her phone and exclaiming that Eric broke up with her. It appears Eric dumped Quinn by text! Deacon (Sean Kanan) will think this is a sign. He’ll insist that Quinn shouldn’t go to Monte Carlo. It’s obvious that Eric doesn’t want Quinn there.

Naturally, Quinn won’t listen to a word Deacon says. It’s futile for anyone to give Quinn advice. It just goes in one ear and out the other. Eric’s updates will simply make Quinn more set on making this trip happen. She’ll yell that Deacon needs to book that flight.

Deacon is pretty much Quinn’s lapdog at this point. Who knows why Quinn has him so whipped? This is the same woman that shoved Deacon off a cliff. Nevertheless, Deacon was willing to let that incident go and now he apparently serves as Quinn’s lovesick minion.

Perhaps Deacon hopes that Quinn will plow through every man in town and eventually cycle back around to him. Whatever the case, Quinn won’t be reuniting with Deacon anytime soon. She’ll do everything within her power to convince Eric that she belongs in his life.

Eric is somewhat under Quinn’s spell as well. Certain men become captivated by Quinn’s beauty, charm and insanity. The fact that Quinn is crazy seems to make her appealing. She’s a bad girl with an unpredictable nature.

The Bold and the Beautiful spoilers indicate that Quinn’s bumpy flight will leave her sandwiched between some annoying passengers. However, Quinn won’t allow it to dampen her spirit. She’ll be confident that things are going to work out. Quinn believes she has a foolproof plan to gain acceptance into the Forrester clan.

Of course, it’s all about to go horribly wrong. B&B viewers can expect Steffy’s jaw to drop when she finds out Eric and Quinn have been hooking up. Stay tuned and don’t forget to check CDL often for the latest Bold and the Beautiful spoilers, updates and news.

#boldandbeautiful heads to #montecarlo this week. Don’t miss it! 🍾