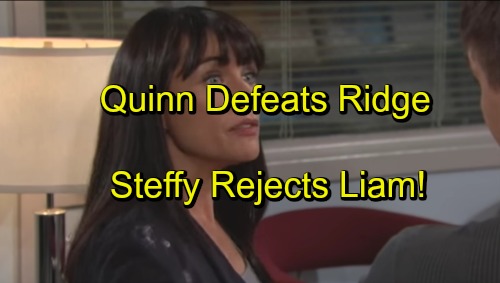 The Bold and the Beautiful (B&B) spoilers tease that Ridge (Thorsten Kaye) and Steffy’s (Jacqueline MacInnes Wood) plan to get rid of Quinn (Rena Sofer) will likely backfire. Carter (Lawrence Saint-Victor) will initially agree to keep the truth about the power of attorney form under wraps. However, a change of heart will put the cover-up plot in jeopardy.

It sounds like Carter could spill the beans after all. Steffy and Ridge will obviously be disappointed. They’ll fear that they’ll never be able to get Quinn out of the picture. Of course, they’ll have concerns about the company as well.

Thanks to Eric’s decision, Quinn will have more power than ever. Steffy and Ridge will believe this could be extremely dangerous. Nevertheless, Quinn will maintain that she’s transformed her life and Wyatt (Darin Brooks) will back her up.

The Bold and the Beautiful spoilers say Wyatt will go to great lengths to convince the Forresters that Quinn has turned from her wicked ways. He’ll want them to respect the love that Quinn has for Eric. Wyatt will argue that Quinn just isn’t the same woman she used to be.

Meanwhile, Liam (Scott Clifton) will think his moment has come. Since Quinn is apparently here to stay, Liam will assume that Steffy will leave Wyatt. After all, this should be confirmation that there’s no escaping Quinn.

Unfortunately, Liam is about to get some bad news. It seems Steffy’s loyalty to Wyatt might win out. Steffy is never going to be a fan of Quinn, but she may realize her enemy is no longer the threat she once was.

Eric’s medical crisis wasn’t Quinn’s fault. She can’t be blamed for Eric’s brain hemorrhage or even the high blood pressure that may have contributed to it. The Forresters are the ones who have been causing unnecessary stress. Quinn pushed for peace and even encouraged Eric to live a healthier lifestyle.

Despite Liam’s heartfelt plea, Steffy will have to turn him away again. The Bold and the Beautiful spoilers say Steffy will insist that they can’t reunite. In fact, most B&B buzz states that Steffy may move back in with Wyatt. It looks like they might work on putting their marriage back together.

Liam will be devastated, but Ivy (Ashleigh Brewer) will be ready to pounce. She’s willing to go out of her comfort zone in an effort to win Liam over. Liam should be feeling vulnerable after getting shut down by Steffy for the umpteenth time.

Will that boost Ivy’s chances with her ex? Although Liam will be heartbroken over Steffy, we all know he tends to bounce between women easily. The waffler could be in Ivy’s arms or even her bed in pretty soon.

This could be Ivy’s opportunity to be with the man she’s pined for.

You can bet that temptation is headed Liam’s way. If Liam caves in, what will happen when Steffy inevitably changes her mind? We’ll give you updates as more details emerge. Stay tuned to B&B and don’t forget to check CDL often for the latest Bold and the Beautiful spoilers, updates and news.

TODAY: Pamela gets emotional as she sits by Eric’s bedside… pic.twitter.com/JFVBnEsAQN