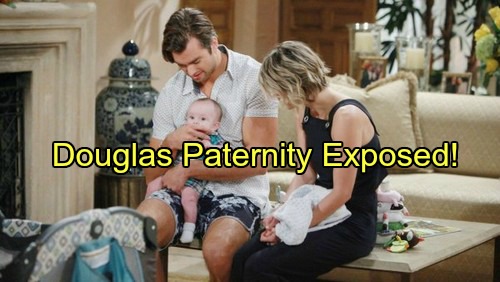 The Bold and the Beautiful (B&B) spoilers tease that the news about Douglas will finally spread. Thomas (Pierson Fode) has been pushing Ridge (Thorsten Kaye) and Caroline (Linsey Godfrey) to reveal the truth about Douglas’ paternity.

It looks like they’ll follow through on their plans. This is going to cause quite a stir around Forrester Creations.

Once everyone gets over the shock, they’ll have to focus on what this means for the family business. Naturally, Rick (Jacob Young) will rub the revelation in Ridge’s face. He’ll insist that this is going to cause a major scandal and they can’t have Ridge in the spotlight.

Of course, Rick will suggest that he should step up as Ridge’s replacement.

Rick will be a definite contender for the CEO position, but he shouldn’t start moving his belongings into the office just yet. The Bold and the Beautiful spoilers say Steffy (Jacqueline MacInnes Wood) and Thomas will also have the Forrester throne on their minds.

Obviously, Ridge will be feeling pretty low. He’s faced a lot of heartbreak over the last year or so. First, Ridge had to accept the fact that his son slept with Caroline. He broke things off for one night and Thomas managed to knock her up.

The blow was magnified since Ridge was unable to give Caroline the child she wanted.

Then, Ridge had to deal with the stress of trying to keep the secret. As other B&B characters became privy to what Ridge was hiding, he struggled under the weight of it all. After Thomas found out, Ridge’s world began to crumble.

Now Ridge feels like he’s losing Douglas, Caroline and potentially his job. Ridge won’t know how this could get much worse. The Bold and the Beautiful spoilers indicate that Ridge will be concerned about what the future holds. He’ll fear that he could lose everything he’s worked for.

If Thomas manages to snag the CEO position, that would really pour salt in the wound! However, Rick and Steffy seem to be more qualified candidates. There’s even a chance that Eric won’t view this as a crushing setback for Forrester.

He might brush it off and let Ridge remain in power.

Eric isn’t Ridge’s biological father, but he loves him like a son. He can surely understand the difficult situation Ridge was placed in. Maybe Eric will decide that he can’t kick Ridge when he’s down. Forrester Creations has made it through scandals in the past and they can make it through this one, too.

Then again, Eric may feel anxious about more unwanted attention. Forrester Creations already had their name in the news because of Maya’s (Karla Mosley) shocker. They survived the crisis, but Eric could worry that FC is becoming a media circus. They’re in this business to sell clothes, not tabloids.

It might be easier to have Ridge take a backseat if this secret becomes public knowledge. In that case, a disheartened Ridge could distance himself from Caroline and begin leaning on Brooke (Katherine Kelly Lang). Regardless, Ridge’s fate will lie in Eric’s hands.

What will Eric’s decision be and how will it affect Ridge’s life moving forward? Will give you updates on what’s in store. Stay tuned to B&B and don’t forget to check CDL often for the latest Bold and the Beautiful spoilers, updates and news.