‘The Bold and the Beautiful’ Spoilers: Ridge Threatens Quinn to Steer Clear of Eric – Bill Asks Brooke to Betray Katie 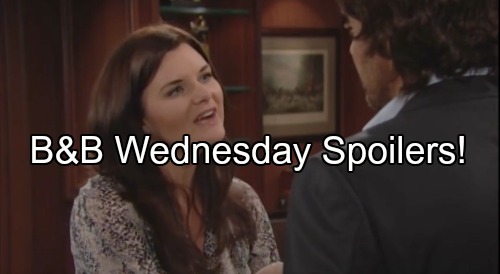 The Bold and the Beautiful (B&B) spoilers for Wednesday, August 10, tease that Deacon (Sean Kanan) will enjoy pestering Quinn (Rena Sofer) about her latest gaffe. He’ll guess that Quinn’s surprise Monte Carlo visit didn’t go over so well with Eric (John McCook). Deacon will be prepared to say “I told you so.”

Quinn will undoubtedly snap that Eric wasn’t the problem. Steffy’s (Jacqueline MacInnes Wood) the one who wasn’t pleased with Quinn’s unexpected appearance. After some ranting, Quinn will suggest that Deacon doesn’t need to be concerned anymore. She’ll announce that Eric ended their relationship.

B&B viewers know that Deacon has a thing for Quinn. He might point out that he’s still willing and available. Of course, there’s no way Quinn is giving up on Eric yet. She’s not the type of woman who accepts defeat.

Elsewhere, Katie (Heather Tom) will try to poke holes in Ridge’s (Thorsten Kaye) plan. Ridge just asked Katie to go after Bill’s (Don Diamont) shares at Forrester Creations, but she won’t want to take the risk. Katie will maintain that she’s not concerned about being set for life. She knows Bill will fight her on this and she doesn’t want to end up in court.

Ridge will do his best to talk Katie into it and it looks like he’ll succeed. Meanwhile, Bill will feel confident that he offered Katie everything she could possibly want and then some. Justin (Aaron D. Spears) may not be so sure. After they talk things over, Bill could start to fear Katie’s wrath.

The Bold and the Beautiful spoilers reveal that Bill will have a chat with Brooke (Katherine Kelly Lang). He’ll hope that Brooke can keep Katie’s mind focused on Will (Zane Achor). Since Brooke is also involved in Ridge’s scheme, she’ll be in an awkward position. Stay tuned to see if Brooke can sort this mess out.

Other Bold and the Beautiful spoilers say Ridge will have a tense meeting with Quinn. He’ll scold her for disregarding Steffy’s feelings by hooking up with Eric. Ridge will remind Quinn of what she did to Liam (Scott Clifton) and how it affected his future with Steffy. Quinn’s deception altered Steffy’s life forever. She’ll never forgive Quinn for that.

Ridge will hint that Steffy may end her marriage to Wyatt (Darin Brooks) just to get rid of Quinn. They’ll probably get into a heated debate about Quinn’s motives for beginning a relationship with Eric. Quinn will insist that they truly fell in love, but Ridge won’t care about her latest obsession. He’ll just want Quinn to steer clear of the Forresters.

Later this week, Steffy will try to help Ridge keep Quinn and Eric out of each other’s lives. Unfortunately, that’s going to be a real challenge. Eric and Quinn have developed quite a bond. It’s going to be tough to break these two up permanently. Eric will likely decide that he’s not going to let his family control his romantic pursuits.

We’ll give you updates on any other trouble Quinn stirs up. This could mean bad news for the Forrester clan and Steffy’s marriage. Stick with B&B and don’t forget to check CDL often for the latest Bold and the Beautiful spoilers, updates and news.