‘The Bold and the Beautiful’ Spoilers: Sasha Has Her Eye on a Thomas – Caroline in Big Trouble 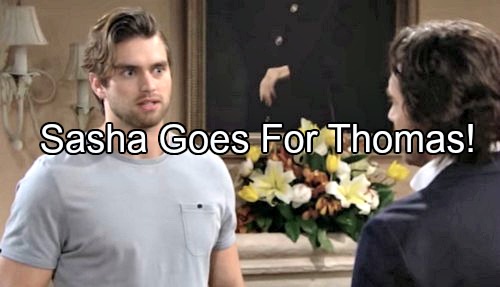 The Bold and the Beautiful (B&B) spoilers tease that Sasha (Felisha Cooper) could have her eye on a new Forrester. Ever since Sasha came to town, she’s spent most of her days chasing after Zende (Rome Flynn). However, Sasha may have realized that she’s fighting a battle she can’t win – at least not anytime soon.

Nicole (Reign Edwards) and Zende are finally getting some well-deserved happiness. Every soap couple gets a quick taste of it. This bliss won’t last forever, but Sasha probably won’t be able to pry them apart within the timeframe she’s shooting for.

Luckily, an opportunity could present itself with someone new. The Bold and the Beautiful spoilers indicate that Sasha will spend a few moments alone with Thomas (Pierson Fode). It appears Thomas may need to alter a dress Sasha intends on modeling. They’ll strike up a fun conversation and some serious chemistry could be going on.

Thomas used to be quite a player, but he’s been trying to change his creepy ways. B&B viewers saw a noticeable shift after Thomas began connecting with Douglas. Of course, Thomas still enjoys flirting. He may be a family man now, but he always seems flattered when lovely ladies take an interest in him.

Ridge (Thorsten Kaye) ended his marriage to Caroline (Linsey Godfrey), which obviously frees her up reunite with Thomas and focus on their son. Thomas told Caroline that’s what he wanted and we believe him. Nevertheless, Sasha could potentially turn into an obstacle.

Thomas will likely view his flirty behavior as just being friendly and killing some time at work. Sasha, on the other hand, might believe she’s found another ticket to joining the Forrester family. Could Sasha become obsessed with pursuing Thomas? We wouldn’t be surprised.

When it comes to men, Sasha doesn’t stop until she gets what she wants or finds a new conquest. It looks like we may be dealing with the latter. Thomas could provide a nice distraction for Sasha since Zende and Nicole are pretty solid. Unfortunately, it’s not clear what that will mean for Caroline and Thomas.

It’s possible that Sasha will try to sabotage Thomas’ relationship with Caroline. Even if she can’t get Thomas in the sack, Sasha could make Caroline think she did. A little deception is all it takes to tear a couple apart.

In this case, the stakes are even higher than usual. If anything happens between Thomas and Sasha, Caroline will undoubtedly feel like she’s made a huge mistake by trusting her ex. She may think she was wrong about the changes she saw in Thomas. Caroline might even beg Ridge to take her back.

Then again, maybe Thomas will shut Sasha down and prove he’s devoted to Caroline. Regardless, B&B is just giving Sasha something to do until Zende and Nicole have their next wave of conflict. The Bold and the Beautiful has spent a lot of time setting up a romance between Caroline and Thomas. It would be weird if they threw all of that prep away at this point.

There must be a reason for this Sasha and Thomas bonding scene though. Will Sasha try to cause trouble for Thomas and Caroline? Is this more of a chemistry test for the future? We’ll give you updates as more news emerges. Stay tuned and don’t forget to check CDL often for the latest Bold and the Beautiful spoilers, updates and news.