The Bold and the Beautiful (B&B) Spoilers: Sasha’s Revenge After Being Fired – Steals Zende and Exposes Julius’ Secret 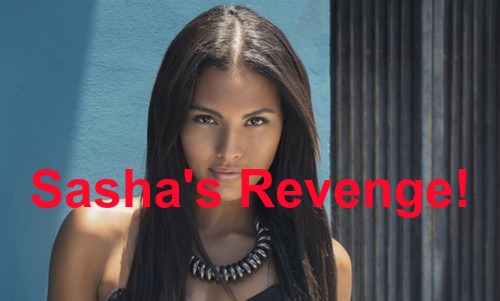 “The Bold and the Beautiful” spoilers tease that Nicole (Reign Edwards) could inadvertently create a romance between Sasha (Felisha Cooper) and Zende (Rome Flynn). Let’s face it: Zende and Sasha have been inching toward this for a while. That’s exactly why Nicole felt she had to intervene when Rick’s (Jacob Young) offer paved the way for her boyfriend and her bestie’s partnership.

Nicole was afraid Sasha’s competitive side would come out and she’d steal Zende away. To be fair, Nicole was probably right. However, it appears there was no way Nicole could win here. Once Sasha and Zende realize that Nicole played dirty, they’ll both be outraged. They were already hitting if off and they’ll soon have a chance to bond in their mutual anger.

Of course, Nicole’s actions could have much bigger consequences than simply losing a friend and potentially getting dumped. We can’t forget that Sasha is hiding a huge secret. Sasha has the power to turn the Avants’ world upside down with one word. All Sasha has to do is blurt out “Daddy” and the whole family could be torn apart by this stunning revelation.

“The Bold and the Beautiful” spoilers indicate that a strong marriage will collapse in the near future. Although there are other couples that would fit with this scenario, Julius (Obba Babatunde) and Vivienne (Anna Maria Horsford) are certainly a pairing to watch. If Sasha chooses to reveal her secret out of spite, it could really shake things up.

Their relationship has always been a rocky one thanks to Julius’ brash attitude and his constant outbursts. Vivienne has been willing to put up with Julius for all these years, but Sasha’s news might put her over the edge. After Vivienne gets updates on her husband’s affair and secret daughter, she may decide that enough is enough.

Nicole just wanted Rick to withdraw the offer so Sasha would steer clear of Zende. Unfortunately, it sounds like Nicole could get a lot more trouble than she bargained for. B&B viewers will want to stay tuned for the mayhem. Stick with “The Bold and the Beautiful” to see if Sasha’s crushed dreams will turn into the Avants’ worst nightmare.

So B&B fans, how do you think Sasha will respond to Nicole’s ruthless move? Will Sasha finally play her daughter card? Will Sasha break up Nicole’s relationship and destroy Julius’ marriage? Voice your opinion in the comments below and don’t forget to check CDL often for the latest “Bold and the Beautiful” spoilers, updates and news.