The Bold and the Beautiful Spoilers: Is Sean Kanan Fired From B&B, Complains on Twitter – Deacon and Quinn Separate Off Camera 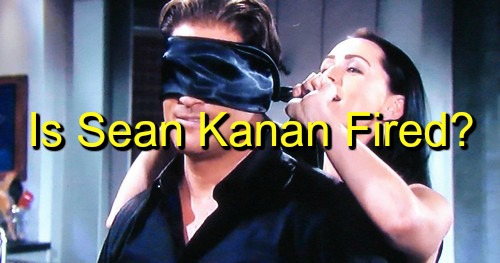 “The Bold And The Beautiful” (B&B) spoilers tease that Sean Kanan is exiting the CBS soap opera as Deacon Sharpe – that is if he hasn’t already. Kanan returned to “B&B” in 2014 after several years away from the soap. “Bold” fans were thrilled to have him back on the scene and it wasn’t long until he got tangled up with Brooke Forrester, and eventually the writers paired the character up with Quinn Fuller.

Over the course of the last few months, Deacon has been spotted on “The Bold And The Beautiful” only a handful of times – and really has no storyline other than being in the background when Quinn is up to her mischief. Recently it was revealed on the CBS soap opera that Deacon and Quinn had “separated” – and the break-up was just mentioned in passing, none of it was aired.

“The Bold And The Beautiful” fans are in an uproar over what looks like Sean Kanan’s unofficial exit from the daytime drama. Not only did the writers break up Deacon and Quinn (giving him literally no reason to even be on the show), but his name has also been pulled from the ending credits on CBS.

One could argue that ‘B&B’ fans are over-reacting, but even Sean Kanan seems to agree with them. This week on Twitter Kanan has retweeted over 20 messages from disgruntled fans that want to see Deacon back on the air on a regular basis.

Sean Kanan is not holding back, and it looks like there is no love lost between him and “The Bold And The Beautiful.” One of the tweets he shared stated, “Deacon seems like the kind of character @ChuckPrattJr would like writing for. Maybe Deacon can head back to GC. @seankanan #YR.” Another tweet shared by Sean reads, “@BandB_CBS @boldinsider @seankanan WHAT THE HELL IS W/ DEACON Why r Quinn & him separated & WHY isn’t he on screen more!! #BoldandBeautiful.”

If Sean Kanan hasn’t left “B&B” yet, it sounds like he is fed up with his lack of screen time on the CBS soap opera and will be leaving on his own accord anyways. What do you think “B&B” fans? Are the spoilers true and has Sean Kanan already left the soap – is that why the writers ended his relationship with Quinn?

If Sean was still a cast member, do you think TPTB will kick him to the curb after the drama he is stirring up on Twitter? Let us know what you think in the comments below and don’t forget to check CDL for all of your “The Bold And The Beautiful” spoilers and news!