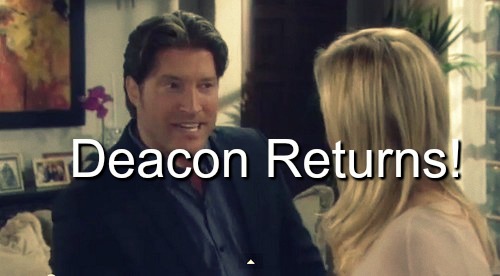 “The Bold and The Beautiful” (B&B) spoilers reveal that Deacon Sharpe (Sean Kanan) is still part of the character canvas despite the recent social media firestorm that erupted after Quinn Fuller (Rena Sofer) casually told her son Wyatt Fuller (Darin Brooks) that she and her hubby had split up.

That, plus Sean Kanan being removed from the show’s credits sure looked like he had exited the show and TPTB were trying to write in a quiet departure. But perhaps CBS did not anticipate the fan backlash that erupted – or that Kanan himself would stoke the fires of the controversy.

When angry fans tweeted their outrage over his inexplicable removal from the storyline, Kanan played along and retweeted. This caused speculation that Kanan had been fired – or quit – B&B perhaps over his lack of storyline and on-screen time.

It didn’t take long for a rep for “The Bold and The Beautiful” to announce, “Sean Kanan as Deacon Sharpe remains a part of the B&B cast and has some amazing story coming up… Tune in or you’re going to miss some great Deacon moments.”

Did showrunners at B&B have no idea that Kanan’s departure would cause such high profile controversy? We’re heading into sweeps shortly and fan upheaval could tank ratings for this all-important viewing window. Did CBS cave under pressure from fans and write Deacon back in ASAP?

Or is all of this a cleverly engineered ruse to cause an upheaval and get fans reinvested in the show? It’s possible that B&B showrunners wanted to amp up controversy to increase viewership during sweeps and that Sean Kanan was in on the whole publicity stunt.

Kanan tweeted on January 19 “Tomorrow on @BandB_CBS Deacon Sharpe. I’m baaaaaack.” But then on the January 20 episode, Deacon was not on the show and Quinn revealed their split. B&B tapes weeks ahead so Kanan would have known he was NOT on the episode.

It looks like he was encouraging fans to tune in to hear about the split. This all seems very suspicious. The episode centered on Quinn announcing the break up then kidnapping Liam Spencer (Scott Clifton) so it’s not like they shot an episode then changed it up later to cut Kanan out.

This all smells like February sweeps scheming – perhaps if TPTB spent a little more time on the scripts for the show – and a little less time plotting in real life, B&B would have already had a good storyline for Deacon and had him back.

All the scheming aside, what works well with the timing of bringing Deacon back now is that either Brooke Logan (Katherine Kelly Lang) or Katie Spencer (Heather Tom) – or both – will be available for him to romance based on the upcoming Logan sisters confrontation over Bill Spencer (Don Diamont).

What do you think B&B fans? Do you think CBS was shocked by fan outrage and immediately wrote Sean Kanan back into the show? Or was this all a scheme by CBS to amp up fans and get them excited about February sweeps?

Share your thoughts in the comments below and come back to CDL often for more “The Bold and The Beautiful” spoilers.