The Bold and the Beautiful (B&B) Spoilers: Spiteful Nicole Gets Sasha Fired from New Job – Sets Off Explosive Reveal 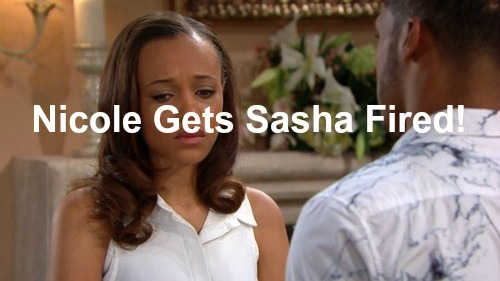 “The Bold and The Beautiful” (B&B) spoilers reveal that after Sasha Avant’s (Felisha Cooper) impromptu photo shoot with Zende Forrester (Rome Flynn), Rick Forrester (Jacob Young) will like the pics and offer Sasha a modeling gig with Forrest Creations.

Unfortunately, Nicole Avant (Reign Edwards) is in full-on bitch mode because of her pregnancy hormones and decides to ax any chance Sasha has at a good life in LA. Nicole is green-eyed and angry when she fights back her morning sickness and tries to help Zende finish the shoot.

But when she comes into the studio, Nicole will see Sasha modeling for Zende instead. Nicole already got crazy over Zende casually chatting with the pretty coworker from the accounting department and will rage over this.

When Nicole hears that Sasha landed a modeling job, she’ll go agro and turn to Rick to get him to undo the job offer. Since Nicole is carrying Rick and Maya Avant’s (Karla Mosley) baby, they won’t refuse her anything.

Nicole doesn’t want Sasha working with Zende anymore and that means she needs to get her fired. Problem is, Nicole has no idea what she’s stepping into by indulging this hormonal rage and going after Sasha.

To be fair, Nicole is usually a pretty nice girl – but when she turns on BFF Sasha, she is acting horribly. Sasha has nothing and no one while Nicole has everything. Sasha just insisted to their dad Julius Avant (Obba Babatunde) that she cared about Nicole and didn’t want to hurt her.

But Nicole’s aggressive actions can turn that all on her ear. Didn’t it sound like Sasha told Julius that her mother is dead or gone away for good? She mentioned that her mom isn’t in Chicago anymore pining for Julius.

So Sasha has no mom around, a dad who denies her existence – and she just wants a shot at a decent life. Sasha finally gets some hope with the modeling offer but then Nicole wants to strip it away. What an awful thing for Nicole to do to her childhood friend.

This incident may set off a Civil War with the Avants. Sasha initially told Julius she didn’t want to hurt Nicole or his family or take anything from them. But when Nicole – who has everything – takes away the one thing Sasha finally got, all that goes out the window.

Look for Sasha to go after the Avants in a big way – personally and professionally. She’ll pursue Zende, may ruin the Avant’s reputation by coming out as a secret daughter – there’s no telling what Sasha could do. She knows all the Avant dirty laundry and Nicole just crapped on her, so it’s on.

When Sasha first showed up, she seemed like a troublemaker, but after getting a look at her backstory and how awful Julius has been to her, you can see that whatever she does, it’s justified – particularly if Nicole is going to turn nasty.

Don’t miss a moment of this gripping B&B conflict and check back with CDL often for more “The Bold and The Beautiful” spoilers and news.