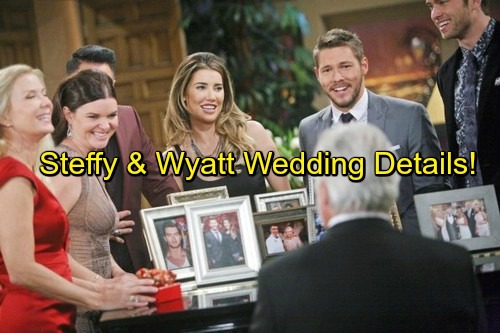 “The Bold and The Beautiful” (B&B) spoilers reveal that next week’s episodes will feature the wedding of Steffy Forrester (Jacqueline MacInnes Wood) and Wyatt Spencer (Darin Brooks). B&B spoilers predict it will go off late in the week of March 28 and will be a glam, yet intimate affair on the beach in Malibu.

Here’s the details of what will happen leading up to their big day and at the event itself. Quinn Fuller (Rena Sofer) knows that she can’t keep Liam Spencer (Scott Clifton) tucked away forever, so she presses Wyatt to get hitched ASAP.

Wyatt and Steffy decide there’s no reason to wait – even though she’s got nagging concerns about Liam’s whereabouts. Steffy picks out a dress just as dramatic as her past wedding attire, but with a less edgy look.

The Bold and the Beautiful spoilers say we’ll see Steffy flaunting her long legs in a high slit pale blue skirt topped by a gorgeous bustier top. Wyatt will be in a pale grey suit with darker piping that’s hipster fab. Steffy will carry a small bouquet of white flowers and it looks easy breezy.

As CDL reported, Chaz Bono will guest as Reverend Rydell, a pal of Wyatt’s who will perform the beachfront nuptials. The guest list will be small – Bill Spencer (Don Diamont) is there as is Katie Spencer (Heather Tom) – so let’s hope it’s not open bar!

Caroline Spencer (Linsey Godfrey) and Ridge Forrester (Thorsten Kaye) are on hand for the bride. Eric Forrester (John McCook) and Thomas Forrester (Pierson Fode) are also there – wonder if baby Dougie will be on hand… Last, of course, is Quinn who wouldn’t miss Wyatt’s wedding.

But Wyatt will be stunned that Quinn does NOT bring her new guy that’s making such changes in her life. B&B spoilers tease that Wyatt is a bit jealous that his mom is so preoccupied with her new flame. Wyatt is used to being her one and only even though he complains about it.

Word from the B&B spoilers is that Wyatt and Steffy will get hitched – no interruptions from Liam will stop the ceremony. That’s disappointing news for Liam-Steffy shippers. When Liam does turn up in a few weeks, it looks like Wyatt will tell him it’s hard cheese – Steffy’s his wife now.

Of course, Liam may not be equipped to fight for Steffy at that point – and has real feelings for Quinn to contend with – despite that his memories will return. The one factor we do wonder about is whether Deacon Sharpe (Sean Kanan) might show…

We know that Deacon isn’t dead, but would he put in an appearance from beyond what Quinn hopes was his watery grave to torment her? Or perhaps he’ll head to the cabin to have a word with Liam while Quinn is at the wedding…

For now, though, it looks like Wyatt and Steffy think they’ve got their happy ending. We know it won’t last, but it will be fun to watch in the meanwhile. Share your comments below on the Wyffy wedding – and check back with CDL every day for more “The Bold and The Beautiful” spoilers and news.