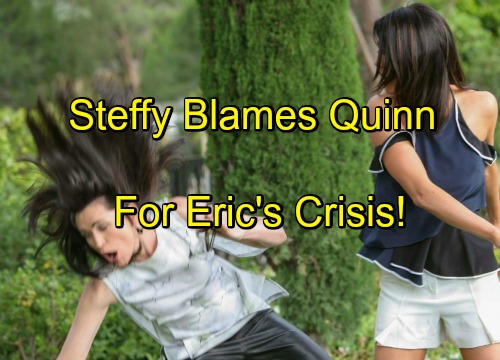 The Bold and the Beautiful (B&B) spoilers tease that a major showdown is looming. Steffy (Jacqueline MacInnes Wood) can never avoid lashing out at Quinn (Rena Sofer) for very long. She’ll soon have another reason to give Quinn a piece of her mind.

B&B fans know that Steffy has repeatedly warned Eric (John McCook) that Quinn would cause trouble. She feels like Quinn only leads to suffering. Steffy can’t believe that Quinn is capable of real love. Instead, she thinks Quinn just breaks hearts and leaves lives torn apart as she passes through.

To be fair, Quinn doesn’t have the best track record. She’s certainly caused plenty of sorrow for many characters, including Steffy. If Quinn hadn’t intervened, Steffy would likely be married to Liam (Scott Clifton) instead of Wyatt (Darin Brooks). There’s no doubt that Steffy’s personal pain is playing a role in this Quinn backlash.

Nevertheless, Quinn has truly tried to turn things around. Eric trusts Quinn and sees how much she’s changed. Steffy, on the other hand, only sees the same vindictive woman she’s always known. After Eric is hospitalized following his collapse at work, Steffy will get fed up with the situation.

The Bold and the Beautiful spoilers say Steffy will suggest that she was right all along. She knew Quinn’s involvement with Eric would end in disaster. Steffy feels like Quinn is a bad luck charm that everyone needs to avoid. She refuses to see any pleasant qualities in her misunderstood mother-in-law. 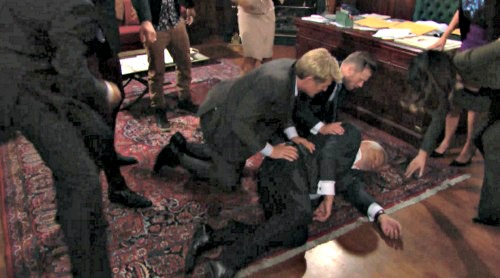 Wyatt will try to put in a good word for Quinn, but that won’t help. Steffy has no intention of backing down. In fact, Wyatt’s attempts to support his mom will probably just make Steffy angrier at Quinn and her spineless spawn.

The Bold and the Beautiful spoilers reveal that Steffy will really let Quinn have it. This could be their most explosive confrontation yet. Steffy will insist that Quinn is responsible for all of the family strife as well as Eric’s crisis. She’ll think her grandfather would’ve been better off if he’d never even met Quinn.

Will Quinn defend herself or start to believe Steffy’s claims? Perhaps we’ll see a mixture of both. Quinn understands that she’s the reason for the conflict and Eric’s elevated stress level. However, she also knows that the Forresters have contributed to the drama. There’s a lot of blame to go around.

In spite of the consequences, Quinn is deeply in love with Eric. She’ll hope for a chance to prove she’s devoted to him. As for Steffy, she’ll be desperate for someone who sees this from the same point of view. Ridge (Thorsten Kaye) agrees, but Steffy needs somebody else in her corner.

Luckily, Liam is definitely on Steffy’s side. He’ll agree that Quinn causes nothing but catastrophes. In addition, Liam will remind Steffy that he hasn’t given up on their future together.

Will their reunion finally happen or will Ivy (Ashleigh Brewer) stall that plan? We’ll give you updates as more news comes in. Stay tuned to B&B and don’t forget to check CDL often for the latest Bold and the Beautiful spoilers, updates and news.

Our hearts are heavy with the loss of #DaytimeTV pioneer #AgnesNixon. Our thoughts are with her family and fans. #BoldandBeautiful