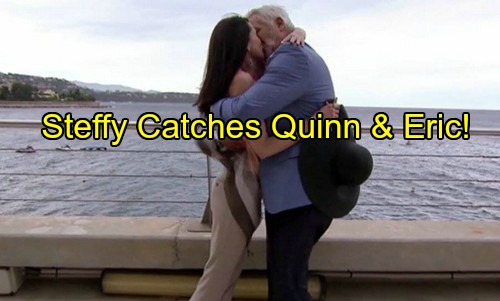 The Bold and the Beautiful (B&B) spoilers tease that the reveal of Quinn (Rena Sofer) and Eric’s (John McCook) fling is drawing near. We’re hearing more details about the big event. You can bet that Monte Carlo mayhem is brewing. Quinn is setting herself (and her son) up for disaster!

Even though Quinn’s actions were reckless and somewhat stalker-ish, Eric won’t turn away his sweetheart. He tried to break things off, but that was probably just his guilt getting to him. Eric undoubtedly feels terrible about keeping this relationship a secret from Steffy (Jacqueline MacInnes Wood) and Liam (Scott Clifton).

Steffy made it clear that she wanted nothing to do with her mother-in-law. As for Liam, he’s practically been using Eric as a therapist as he copes with Quinn’s destruction. Liam can’t stop talking about how much damage Quinn caused. He constantly rants about resenting Quinn for what she’s done.

Nevertheless, Eric is old enough to know that sometimes you just have to go for it. Perhaps Eric will eventually decide that now’s the time to be a tad selfish. He wants Quinn and she wants him, too. The Bold and the Beautiful spoilers indicate that Quinn will have romance on her mind as she hits the beach with Eric.

Unfortunately, Steffy will end up spotting the pair together as they linger by the waves. She’ll be shocked and appalled by the news that they’re an item. Steffy never imagined that Quinn would be Eric’s mystery lady. She certainly won’t approve of Eric’s choice, but Quinn may get most of the blame.

Steffy will believe this proves Quinn will never leave her or her family alone. No matter what Steffy does, she can’t escape Quinn and her nutty schemes. Once Wyatt (Darin Brooks) gets updates on his mom’s love interest, he’ll be equally stunned. Wyatt will instantly question what this could mean for his marriage.

B&B viewers know that Wyatt has been nothing but confident since he tied the knot. Despite Liam’s pursuit of Steffy, Wyatt has always insisted that his relationship is solid. After this fling blows up, Wyatt will have to accept that everything is far from rosy. This could be the last straw for Steffy.

Wyatt will do his best to keep Steffy in his corner, but she’ll likely pull away. Steffy may need some space while she processes all of this. She may begin to wonder what else Quinn could do over the course of her lifetime.

If Steffy and Wyatt have kids one day, Grandma Quinn could really go wild. She’s already possessive and meddlesome. Who knows what could happen once little Spencers are running around? Steffy will grow fearful about the future. She’ll have to make some difficult decisions.