The Bold and the Beautiful (B&B) Spoilers: Steffy Crashes Cabin – Catches Liam and Quinn in Bed 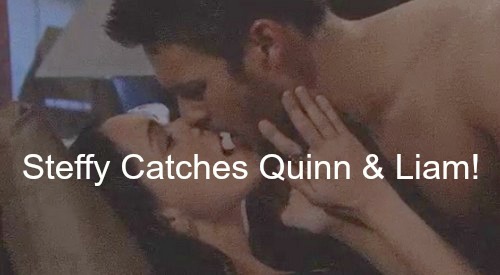 “The Bold and The Beautiful” (B&B) spoilers tease that Quinn Fuller (Rena Sofer) will soon be caught with Liam Spencer (Scott Clifton) and it may be none other than Liam’s fiancée Steffy Forrester (Jacqueline MacInnes Wood) who finds them together.

Steffy told her dad Ridge Forrester (Thorsten Kaye) that she needs some closure from Liam before she can move forward with Wyatt Spencer (Darin Brooks). But has anyone noticed that Steffy keeps moving the bar of what she wants?

First she wanted to find out what’s going on and then she got a text from Liam. But that wasn’t good enough for Steffy, so Quinn arranged a voice mail to be left from Liam breaking things off. But now that’s not enough either. Steffy wants to talk to Liam face to face.

But Steffy should be careful what she wishes for, because what she sees is going to stun her. Steffy will call Quinn later this week and is shocked when she hears Liam on the phone. Of course, with his memory wiped, Liam won’t know who’s on the line.

Quinn will no doubt try and explain this away, but there’s not much of an excuse for why she’s with her sworn enemy who seems to have vanished from his life. Steffy will suspect that Wyatt’s mom is up to no good – based on her past actions with Liam – and head to the cabin.

The worst outcome is if Steffy bursts in and finds Quinn and Liam in flagrante, naked and in bed. But no matter how Steffy finds them, seeing Liam’s obvious affection for Quinn will shock and disgust Steffy – although she has no room to talk given her past with Liam’s dad Bill Spencer (Don Diamont).

How can Quinn explain his presence? Will Quinn be able to manipulate Liam into playing along and saying what’s necessary to convince Steffy that he wants to be there with Quinn? Will Steffy leave horrified and defeated, shocked that Liam chose Quinn over her?

If Steffy wanted a sign that Liam was done with her, believing that he’s taken up with Quinn and prefers the scheming older woman should convince her. B&B spoilers have teased for a while that Liam’s memory would return in time for him to disrupt Wyatt and Steffy’s wedding.

B&B spoilers also reveal that Chaz Bono has been cast to play a minister for an event at the end of March. Could that be Wyatt and Steffy’s wedding? Will this twisted kidnapping turned love affair drag on that long?

If Steffy does see Quinn with Liam and is convinced that Liam wants to be with her that would certainly be enough to convince her that marrying Wyatt is the thing to do. But I can bet Quinn won’t get a mother of the groom invitation!

What do you think B&B fans? Will Steffy catch Liam and Quinn in the midst of an “intimate” encounter? Can Quinn explain Liam’s presence without raising suspicions? How long will Liam be held in this casual kidnapping before someone rescues him or he comes to his senses?

Share your comments below and come back to CDL for daily “The Bold and The Beautiful” spoilers, rumors and news.