‘The Bold and the Beautiful’ Spoilers: Steffy Crazy Tantrum as Quinn Wreaks Havoc – Wyatt’s Last-Ditch Effort to Save Marriage 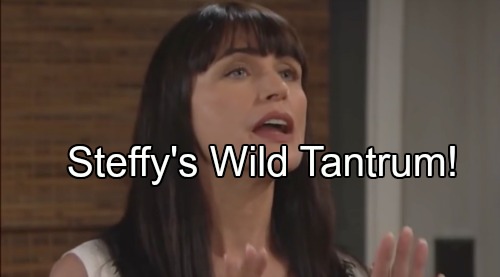 The Bold and the Beautiful (B&B) spoilers tease that Steffy (Jacqueline MacInnes Wood) is about to have a major meltdown. Eric (John McCook) has realized that he shares something special with Quinn (Rena Sofer) and he doesn’t want their romance to be over. In fact, Eric said they were just getting started.

When Steffy hears that Eric could actually have a long-term future with Quinn, she’s going to hit the roof. The Bold and the Beautiful spoilers suggest that Steffy will be in total panic mode as Quinn wreaks more havoc. Steffy is incredibly close to her breaking point.

Wyatt (Darin Brooks) promised that he would take care of this. Bless his heart! If Wyatt truly thought he could convince Quinn to make any changes, he must be as crazy as she is. There’s no way Quinn is going to leave Eric voluntarily.

It took Quinn quite a while to get Liam (Scott Clifton) out of her head. She was in love with him long after her ruse was exposed. Nevertheless, Quinn found Eric and she’s fallen head over heels again. She credits Liam for teaching her how to open her heart. Quinn feels like she’s a better person and maybe she is – at least a little better anyway.

Unfortunately, Steffy will never forgive Quinn for what she’s done and that presents a problem. If Quinn sticks around, there’s always going to be strife for Steffy and Wyatt. It’s not like their relationship was exactly solid to begin with.

Even before Liam’s return, Steffy still struggled with doubts. Now that Liam has practically become a creepy stalker, it’s just a matter of time before Steffy is back in his arms. Quinn will undoubtedly push Steffy too far sooner or later.

B&B spoilers say Wyatt will prolong the inevitable by approaching Quinn for another round of admonishment. He’ll decide to lay down the law and make Quinn understand that he means business. In other words, Wyatt is about to deliver some tough love. He’ll insist that Quinn needs to follow his orders – or else.

Wyatt is likely underestimating Quinn’s affection for Eric. She cares about her son, but he’s a big boy now. Perhaps Quinn will choose to put her own needs above Wyatt’s this time. Their bond could crumble if Quinn costs Wyatt his marriage.

It seems like the end could be in sight for Wyatt and Steffy. Unless Wyatt can really get through to Quinn, there may not be any hope. Wyatt will fight for Steffy, but there’s only so much he can do. It’s clear that some tense moments are on the way. The Bold and the Beautiful fans will be anxious to see what unfolds.

So B&B fans, what do you think about Steffy’s impending tantrum? Is Steffy overreacting or is her outrage understandable? Will Wyatt be able to do anything about his insane mother? We’ll give you updates as more news emerges. Stay tuned and don’t forget to check CDL often for the latest Bold and the Beautiful spoilers, updates and news.