The Bold and the Beautiful (B&B) Spoilers: Steffy Fears Ivy Has Stolen Liam – Zende and Nicole Breaking Up 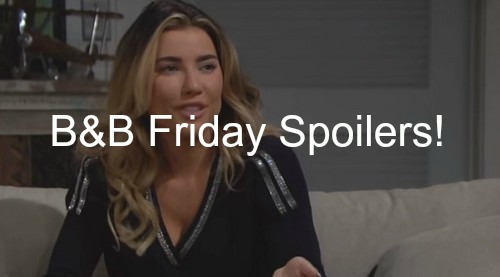 “The Bold and the Beautiful” spoilers for Friday, January 8, tease that Steffy (Jacqueline MacInnes Wood) will open up to Wyatt (Darin Brooks) about her frustration with Ivy (Ashleigh Brewer). Steffy will insist that Ivy always plays the victim and that she’s using her last opportunity to take Liam (Scott Clifton).

To be fair, Steffy came back and stole Liam first. Some people might say Steffy is just getting what she deserves.

However, Steffy may be right about the fact that Ivy is taking advantage of this chance. In B&B’s preview video, Ivy tells Liam that it doesn’t matter where they are or how much distance is between them. Ivy will want Liam to know that she’ll always love him. Liam will let Ivy down gently by suggesting that she’ll meet someone who’s perfect for her someday.

Liam might want to keep his options open. “The Bold and the Beautiful” spoilers reveal that Steffy will continue to stew about Liam’s impromptu trip to Australia. Unfortunately, Steffy hung up on Liam before he could explain his spill in the lavatory. Wyatt will console Steffy as she tries to accept that Liam ditched her and went to Sydney.

Steffy undoubtedly fears this could be the end of the road for her romance with Liam. We know that Ivy hasn’t won this battle, but what could happen if Steffy thinks it’s all over? Wyatt and Steffy may start to bond in the midst of the heartache. Liam had better get back to Los Angeles ASAP or else his brother could make a daring move.

Meanwhile, Nicole (Reign Edwards) will begin to worry about her future with Zende (Rome Flynn). The pregnancy has definitely been coming between them lately, but Nicole will suspect that their issues run deeper than the baby drama.

As Zende grows closer to Sasha (Felisha Cooper), Nicole will likely wonder if she still fits in Zende’s life. Stick with “The Bold and the Beautiful” for updates on how long Zende and Nicole can keep their relationship intact.

So B&B fans, what do you think about the news that Steffy will lean on Wyatt in her time of sorrow? Will Liam be able to clear up the confusion eventually? Are Nicole and Zende on the verge of a breakup? Voice your opinion in the comments below and don’t forget to check CDL often for the latest “Bold and the Beautiful” spoilers, updates and news.

The Bold and the Beautiful (B&B) Promo Video for Friday, January 8