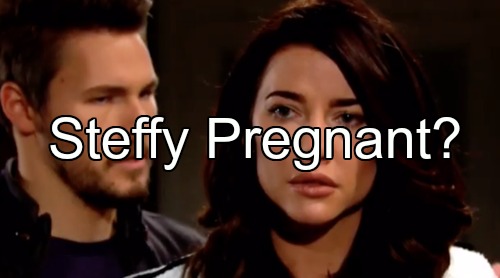 “The Bold and the Beautiful” (B&B) spoilers tease that Steffy’s (Jacqueline MacInnes Wood) head will soon be spinning. Now that Reverend Rydell (Chaz Bono) has been exposed as a criminal, Wyatt (Darin Brooks) is wondering what this could mean for his union with Steffy.

He’ll demand some answers from this so-called minister in hopes of figuring out if his marriage is legal.

There’s a good chance that Steffy and Wyatt didn’t make it official on their beautiful wedding day. Wyatt has always maintained that they married each other because they wanted to, not because Quinn (Rena Sofer) tricked them into it. Of course, we all know Steffy wouldn’t have gone through with the ceremony if Liam (Scott Clifton) had been around.

Over the years, Steffy has nearly driven herself crazy trying to be with Liam. “The Bold and the Beautiful” has always portrayed Liam as Steffy’s true love. As for Liam, he usually thinks about a flavor of the month rather than a soul mate. Nevertheless, Liam is currently convinced that Steffy is “the one.”

If Steffy and Wyatt’s marriage is declared invalid, it’s only a matter of time until Liam wins Steffy over. She has feelings for Wyatt, but it’s just not the same. When Steffy looks at Liam, there’s real passion. She’s content to pine for now, but that will likely change if she’s no longer legally bound to Wyatt.

Once the pressure is off, Steffy may go with her instincts and choose Liam. They would undoubtedly celebrate their reunion and prepare for a future together. Liam might even get Steffy to agree to a quickie wedding. Would it be somewhat ridiculous considering the circumstances? Sure, but B&B doesn’t stand for the best and the brightest.

Regardless, more trouble is inevitably looming. “The Bold and the Beautiful” won’t just hand them a “happily ever after.” We’re going to want more drama. As soon as Steffy picks Liam, another major obstacle will likely emerge.

Could Steffy learn she’s pregnant with Wyatt’s baby? It sounds like a soapy possibility. It would certainly throw Steffy for a loop. She might feel obligated to be with Wyatt and focus on their family.

Then again, Zende (Rome Flynn) had no qualms about reuniting with Nicole (Reign Edwards) in spite of Sasha’s (Felisha Cooper) made-up pregnancy. Perhaps Steffy would stay with Liam and just try to co-parent with Wyatt. Still, this twist could take this storyline in an interesting direction. Stick with the CBS soap for updates on the surprises ahead.

So B&B fans, what do you think about the idea that Steffy could end up pregnant? Will this be the shocker after the marriage is declared invalid? If Steffy is expecting Wyatt’s baby, would that news change her mind about being with Liam?